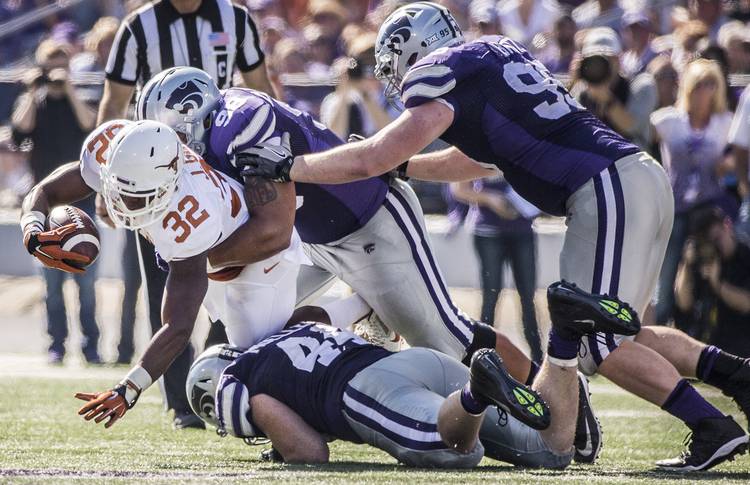 As big as the win over Oklahoma was, it’s now old news at Texas. If any Longhorn needs a reality check, take a hard look at the Big 12 standings.

Odd thing, though. That’s exactly what these players have been doing, apparently.

“We beat ‘em, enjoyed it and now it’s time to get ready for Kansas State,” senior running back Johnathan Gray said. “We’re still 2-4, so we have to go out and prove ourselves that Texas is still tough, Texas can fight and Texas has players that want to win.”

Offensive guard Sedrick Flowers acknowledged that fans may wonder what lies ahead. Was the OU win a harbinger of things to come or merely an rivalry-juiced outlier in a disappointing season?

Saturday’s home game against Kansas State (3-3 overall, 0-3 in the Big 12) is a chance for Texas players to see for themselves.

“If I was a fan, and I was watching my team how they were doing this year, that’s what I would think,” Flowers said. “We want to go out there and show them. This is who we are and we can play like this every week.”

Midway through last season, UT coach Charlie Strong put down a marker that the 2014 team would finish in a bowl game. He wouldn’t go that far on Monday, but said, “A key thing for us is that we can control our own destiny. We have to be ready to go and play.”

Center Taylor Doyle said a winning record and bowl game are both possible. “We know we’re capable of playing sound football and that our record isn’t reflective of the type of team we think we are,” Doyle said.

Strong always believes the seniors should their careers “the right way.” That means they should finish on a winning note, enjoy a bowl trip and, under the right conditions, celebrate a championship. It’s the underclassmen’s job to help the seniors get there, he preaches.

“That’s what I’m going to do,” junior defensive tackle Paul Boyette said, “keep playing my tail off to get those seniors to a bowl game.” In return, Strong requires the veterans to take ownership. He requires seniors to sit in the front of team meetings and help hold others accountable.

“If you mess up on the field or off the field, we hold you accountable,” said senior linebacker Peter Jinkens, the team’s leading tackler. “As a team, you should know what to do and not to do. If we trust you, you should step up.”

Currently two games under .500, these Horns must get back to a winning record first. The next road block is a team that got blown out last weekend by men believed to be angry Oklahoma Sooners. K-State got smashed, 55-0.

Strong said he watched the early portions of that game but quickly turned it off. That’s not the same bunch of Wildcats the Longhorns will see at Royal-Memorial Stadium, he figured. Coach Bill Snyder’s club has won six of the last seven games against Texas.

Last season’s 23-0 loss in Manhattan was the first time Texas had been shut out since 2004. It was a sloppy, dysfunctional affair.

“We go up there last year, they beat us pretty good. They pounded us,” Strong said. “That’s always something you can point to.”

Right tackle Kent Perkins (knee) was moving around better at practice on Sunday, but is still considered day-to-day, Strong said. Defensive tackles Hassan Ridgeway and Poona Ford, who both had shoulder injuries against OU, should be ready.

Strong did not give an injury update on receiver Daje Johnson. The senior went through warm-ups in full game attire against Oklahoma as part of UT’s concussion protocol. There have been no indications he suffered any setbacks.

For Texas, this week’s goal is fairly straightforward: Build on the Oklahoma victory and keep climbing.

“It’s really up to us,” senior receiver Marcus Johnson said. “Are we going to go out and do it or not?”

Notebook: Longhorns are healthy as season hits the backstretch