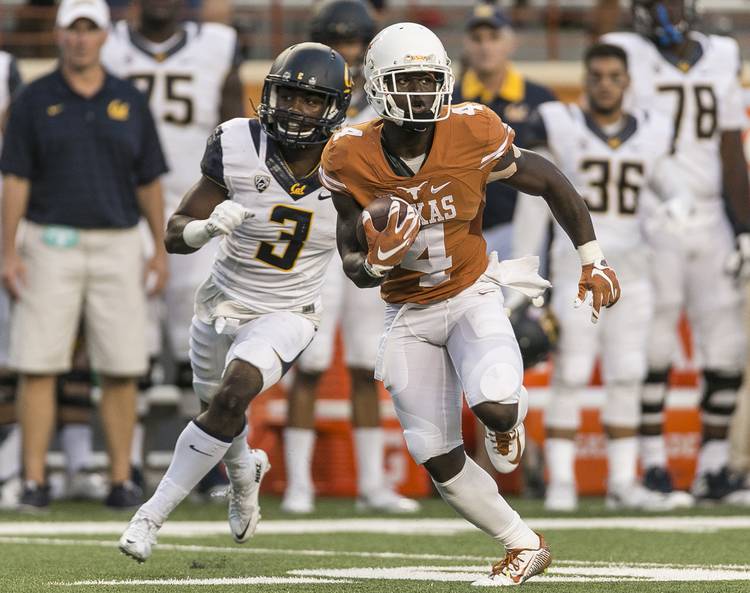 Following a therapeutic win over Oklahoma, the Longhorns had a chance to heal physically during the off week.

Scrapes and bumps aside, the trainer’s room is as quiet as anyone could hope for entering this season’s second half. On Monday, head coach Charlie Strong delivered a promising injury report, noting that pretty much everyone aside from linebacker Edwin Freeman (shoulder) could play Saturday against Kansas State.

That means wide receiver Daje Johnson (concussion) and defensive tackle Hassan Ridgeway (shoulder) should be good to go. Strong added that right tackle Kent Perkins is “day-to-day” with a knee injury, and linebacker Breckyn Hager (ankle) should be back soon — possibly as early as this week — after missing the OU game.

The only season-ending injuries to significant players happened in the spring to cornerbacks Sheroid Evans and Jermaine Roberts and linebacker Dalton Santos.

Sanders unable to re-enroll: Though a jury found him not guilty of sexual assault last week, former Texas receiver Kendall Sanders won’t be returning to UT. A university spokesman said disciplinary measures taken by the school are independent of the legal system, and that expulsions are permanent. Sanders was expelled from school and dismissed from the program after being arrested for sexual assault in July 2014.

After his acquittal on Friday, Sanders told the American-Statesman, “I’d love to go back to Texas.”

On Monday, Strong was asked whether he’d welcome back Sanders, to which Strong replied he would “have a conversation with a lot of people.”

By the sounds of it, that conversation would be moot.

It read in part: “Please accept my apology for the manner in which we represented you on Saturday. I know you are pained by the outcome, as I am. I hope that you will appreciate our players for never giving up even in the face of such adversity and the loss of so many of their teammates.”

KSU was shutout for the first time since 1996 and played the second half with Kody Cook, a receiver, at quarterback due to a thin depth chart and an ineffective start by Joe Hubener.

Texas is a 4-point favorite this week.

Short yards: After playing three morning games in a row, Texas will face Iowa State at 6 p.m. on Oct. 31 in Ames. It’ll be shown on FS1. … Though they played their finest game of the season, none of the linemen graded out higher than a B against Oklahoma, right guard Sedrick Flowers said. Line coach Joe Wickline is a hard grader who has not given an A grade in two years, Flowers added. … Strong weighed in on Steve Spurrier’s resignation at South Carolina, suggesting his former boss at Florida “changed college football” by bringing the spread offense to the Southeastern Conference.

As the Oklahoma excitement fades, Texas is back to 2-4 reality

What’s Vegas betting on? Unpredictability, when it comes to Texas, Kansas State