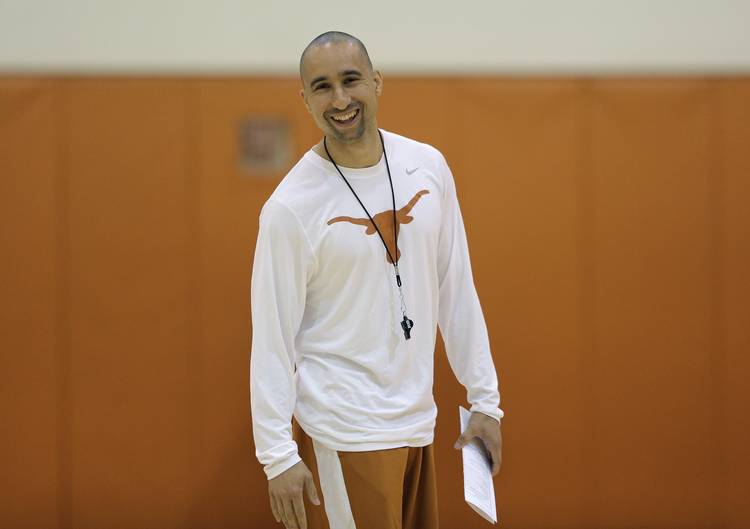 KANSAS CITY, Mo. — Texas coach Shaka Smart’s next-level thinking is pitch perfect for the school’s Department of Philosophy, which claims that the pursuit of wisdom is “one of the oldest and most enduring human intellectual enterprises.”

If the Longhorns are ever going to succeed under Smart, they must sharpen their intellectual acuity along with their jumpers and defense.

“Receptivity is the first step in buy-in,” Smart said Tuesday at the Big 12 men’s basketball media day at the Sprint Center. “Then you really take ownership to what you’ve been receptive to. And then you practice and practice and work toward mastery.

“I don’t know that we ever get to mastery in an area like competitiveness or accountability,” he added. “But we still want to make progress in those areas. We’re still working on the ownership part of it.”

Senior guard Demarcus Holland appears to be taking ownership, or at least he grasps the conceptual nuances. Multiple times on Tuesday, he used the phrase “underachieved” when describing his career and of his fellow seniors.

“We’ve got a lot of older guys on the team, been through a lot, underachieved a lot,” Holland said. “We’re ready to reach some goals that we haven’t reached before.”

To do that, Texas must first get beyond its confusing, dysfunctional past which appears to be fouling up the present.

There were times last season when players didn’t understand what former coach Rick Barnes wanted. One assistant said one thing, another assistant said another. Barnes, not exactly the poster child for Toastmasters, could trump them all with a contradictory third message.

That led to confusion at critical times, including the last four minutes of UT’s last appearance in this building — a 69-67 loss to Iowa State in the Big 12 tournament.

“I wouldn’t say it was a bad vibe or culture,” said guard Isaiah Taylor, who chose his words carefully, “but there wasn’t a lot of confidence floating around the gym.”

OK, fine, Smart figures. But enough about Barnes. What are these players going to do about it?

“To be honest with you, when I first got to Texas, and even since then, there’s been some fingers pointed,” Smart said. “Well, this was that guy’s fault. Or that was that guy’s fault. Or this player came in and that put me in a different position. The reality is, take a step up and decide what you want to be as a player and a team. That’s what we’re going to have to do.”

That’s why Smart and his assistants focus on having fun. Everything is a competition, and heaven help those who don’t celebrate positive things in practice. Smart believes, or hopes, the good vibes can unlock better play from a veteran unit slated to be one of the most experienced in college basketball.

How could any basketball athlete worth his Nikes (or Under Armours, or whatever Texas ultimately decides) not like the run-and-gun style that Smart teaches?

Virginia Commonwealth averaged 16.8 seconds per possession last season while Texas plodded along at 18.6. That translates into a lot of points; VCU averaged more than 70 points per game three straight seasons.

“It’s just going to be up and down, fast. I mean, fast,” Holland said. Fans get their first look at the up-tempo Horns during an intrasquad scrimmage on Wednesday at Gregory Gym.

Smart won’t give any playing time to those who aren’t mentally tough. Ultimately, that was the point of the Navy SEAL training in September. The early-morning exercises were meant to push players into uncomfortable places, from climbing rope ladders to going face-down in a boat full of ice.

“That was … the worst experience I’ve ever had in my life,” Taylor said. “I don’t know how to swim. I don’t plan on learning anytime soon. Water is outside of my comfort zone.”

And yet, miraculously, Taylor survived.

“Since Shaka and this coaching staff have gotten here, that’s something he’s instilled in us — that positive vibe, that self-motivation to believe in ourselves,” Taylor said.

What’s Vegas betting on? Unpredictability, when it comes to Texas, Kansas State