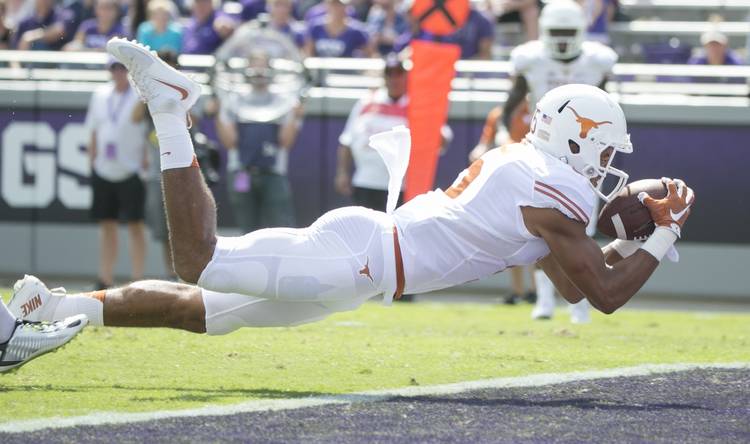 Texas wide receiver Lorenzo Joe (5) falls into the end zone in the fourth quarter during the Texas at TCU game Saturday, Oct. 3, 2015, in Fort Worth, Texas. (Rodolfo Gonzalez/Austin American-Statesman)

When Texas released its first depth chart of the season, one notable player was conspicuously absent — Lorenzo Joe.

The sophomore receiver expressed his dismay in a tweet, posting: “I’m not even on the depth chart?? Wow…”

After five games in exile, Joe ascended to starter against Oklahoma, and he’s likely to stay there against Kansas State this week.

“It’s a combination of some guys not playing as well and him practicing well and having a good attitude,” play-caller and receivers coach Jay Norvell said Tuesday.

Against OU, Joe validated Norvell’s decision to insert him over Armanti Foreman with several downfield blocks, including on Marcus Johnson’s shovel-pass touchdown reception. Joe had one catch for 9 yards. Before the game, he had taken just one snap with the offense, and it resulted in a garbage time touchdown that kept Texas from being shut out at TCU the week before the OU win.

“We always challenge our kids to find work if they’re not getting the ball in their hands,” Norvell said. “There’s some great clips of that in Lorenzo. He’s certainly a great example to the rest of our team. He hadn’t played a lot in the first part of the season.”

Joe called his tweet about being kept off the depth chart “selfish.”

“I’ve always kept a positive attitude, and that’s what I’ve had to do all year,” he said.

Next step for Heard: Joe’s best friend on the team is quarterback Jerrod Heard. The two grew close during recruiting, and it was Joe who persuaded Heard to join him in committing to Texas.

Now they’re trying to revive a passing attack that ranks just No. 118 nationally. Heard has not reached 100 yards passing in the past two games.

“We have to be productive in the passing game,” Norvell said. “Jerrod really needs to improve in these last six games. We have a young quarterback, and we need to train him to be the type of player that he has to be for us to win games.”

By the sound of it, Heard is competing not only to win games, but to win the job for next year.

Snyder mum on starting QB: Kansas State coach Bill Snyder responded “not sure yet” when asked who will start for the Wildcats at quarterback this week. In a 55-0 loss to Oklahoma, quarterbacks Joe Hubener and Kody Cook combined to complete just 5 of 22 passes for 45 yards and three interceptions. Hubener, a former walk-on, started the game before giving way to Cook, a receiver, after halftime.

Short yards: Snyder said of Heard, “when he wants to be the fastest guy in the world, he probably is.” … Norvell played for Snyder at Iowa, where Snyder was an assistant coach. The two remain close, and after Oklahoma beat Alabama in the Sugar Bowl in the 2013 season, Snyder wrote Norvell a congratulatory letter. … Heard said he thinks K-State’s ugly loss to OU “built anger.”