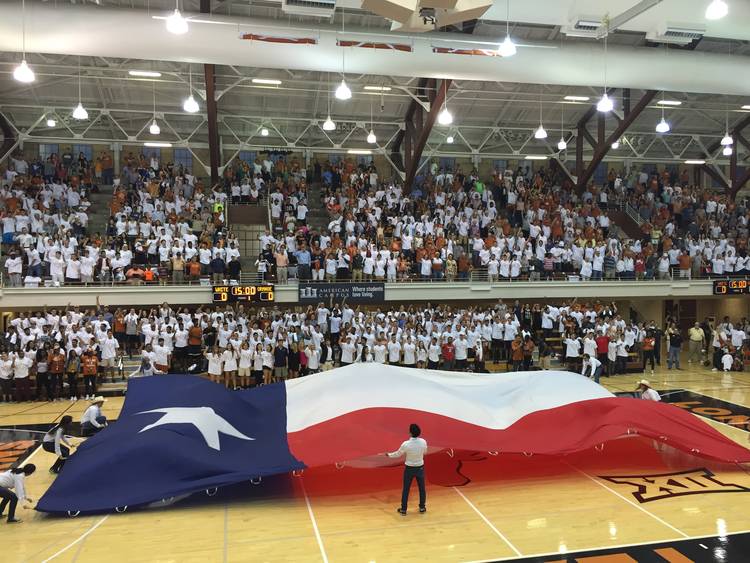 An announced crowd of 3,129 showed up to see the Texas men's basketball team intrasquad scrimmage on Wednesday at Gregory Gym.

It’s been one year, seven months, nine days and counting since Shaq Cleare played Division I basketball. Well, that’s how long it’s been since he’s been in a game.

How does one pass the time?

The Texas big man sat out last season after transferring from Maryland. The junior stands 6 feet, 7 inches tall “on a good day with some shoes on.” He’s still listed at 285 pounds on the roster. But Cleare’s satisfied the NCAA rulebook and ready to make some hay now that he’s back on the floor.

And that’s a good thing for Texas’ lengthy front court, which includes the 6-10 Cam Ridley and 6-11 Prince Ibeh.

Cleare showed a nifty baby hook on the opening play of Wednesday’s intrasquad scrimmage at Gregory Gym. He wasn’t afraid to step off the block and try a turnaround move on the baseline, either. Cleare had a nimble passing touch and even led a runout in the second half.

Cleare finished with 11 points and five rebounds in 26 minutes of a 30-minute affair. Only trouble was those pesky fouls. Cleare banged his way to four in the first 14 minutes. Fortunately, the officials didn’t let him foul out of what was essentially an organized practice.

Given that coach Shaka Smart wants to see more nastiness from his players, a little banging inside was probably OK.

“The nastiness has to be in you,” Cleare said. “I’m a kid with a chip on my shoulder, so I just go out there and play hard. To be nasty, you don’t really have to go crazy. Just give it everything you’ve got. Be grinding and play with an attitude. That’s all it takes is an attitude.

An announced crowd of 3,129 fans lined up outside and seemed eager to get in. The line stretched down Speedway, turned east onto 21st Street and went almost all the way to Royal-Memorial Stadium. The turnout was shocking, frankly.

Senior Demarcus Holland led Cleare and a team of younger players, dubbed the White team, against the veterans like Isaiah Taylor and Javan Felix wearing orange.

Cleare made a sizable first impression, as did freshman guard Kerwin Roach, who had 18 points, five assists and three turnovers. Roach lined up against Taylor, Felix and Kendal Yancy and looked like an energetic go-getter against all three.

In the first five minutes alone, Roach had a one-handed dunk, a 3-pointer and a steal by knocking the ball away from Ridley on the low block.

Smart has said Roach and Taylor will play alongside each other, giving Texas one of the fastest backcourts in college basketball. Is there anyone faster? “Unless it’s Usain Bolt and Tyson Gay, I don’t think so,” Roach said.

“His biggest challenge so far in practice has been throwing the ball to the guys that are in the same colored jerseys as him,” said Smart, who wants to see Roach finish with a 2:1 assist-to-turnover ratio. “He’s actually made a lot of progress with that.”

Fellow freshman Tevin Mack also had a solid-if-uneven debut. He tallied 16 points on 7-of-11 shooting but looked lost at times in transition. Eric Davis, the Horns’ third freshman, also had 16 points and went 2-for-4 from 3-point range.

Otherwise, it was about what you’d expect from the veterans. Ridley got a few dunks, as did Ibeh. Connor Lammert hit two 3-pointers coming off crisp touch passes. Felix continues to shoot that corner 3-pointer, and going 1-for-5 in the process.

Smart, who wants everything to be a competition, said he thought about mixing and matching the rosters during the game but stuck it out just to see who would win. There’s no telling what sort of aerobic fun awaits the Orange team, which lost 72-63.

Holland, the de facto White team captain, said he heard smack talk all day from those playing for the Orange team. He seemed practically giddy to come away the victor.

“The other team thought they were going to beat us because they had more experience,” Holland said. “I told those young guys the season is right around the corner. This is where you prove it, prove that you belong.”

For a larger view of the box score, click here.