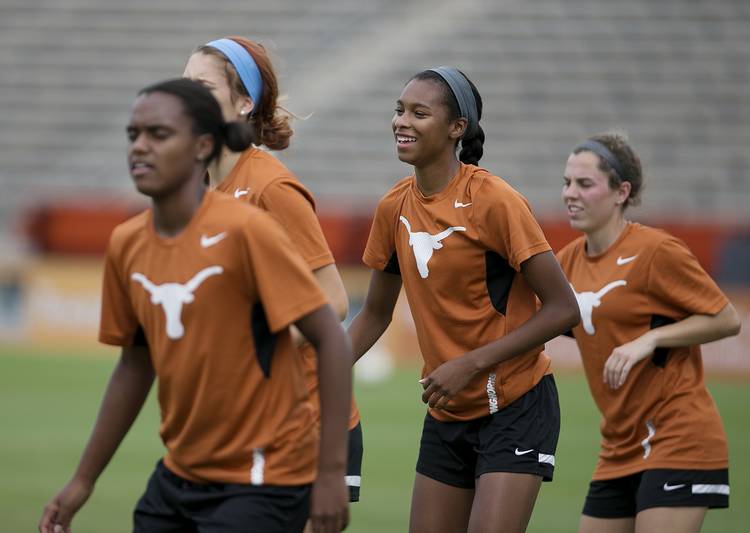 To say Texas soccer coach Angela Kelly stumbled onto freshman Alexa Adams may be accurate, but it would also discredit the work Kelly put into it.

As many of her coaching peers packed up from the famous Surf Cup in California, Kelly headed over to a “nondescript” field for a match with far less fanfare. Adams’ team lacked the credentials to participate in the main event, but Kelly was nonetheless drawn to the frail forward who was 15 or 16 at the time.

“Not many people were out there,” Kelly said.

Kelly’s diligence paid off. Adams soon matured into a top recruit who has Texas in position for a Big 12 title heading into the final weekend of conference play. The Longhorns (7-3-4, 4-1-1 in the Big 12) trail West Virginia by one win heading into home matches this weekend against Oklahoma (Friday) and Baylor (Sunday). WVU wraps up on the road at Oklahoma State and Baylor.

This week, the Horns picked up 20 votes in the coaches poll and are sitting just outside of the top 25.

“In the beginning of the season, we weren’t connecting as well,” Adams said. “I think we’ve settled down and started to play our game.”

Adams has been a big part of that. After scoring just one goal in the season’s first 11 matches, she has four goals in the last three matches and also picked up her first assist in a road upset at No. 17 Texas Tech. On Oct. 9, her match-winner against Iowa State — a 24-yard strike off of a header by teammate Kelsey Shimmick — checked in at No. 8 on SportsCenter’s Top 10 Plays.

That Adams is finding the back of the net is no big surprise. In four years of high school she tallied 102 goals (37 as a senior) with 60 assists. She was equally prolific on the club scene, notching 100 goals and 53 assists, and climbing to the big stage from those overlooked fields where Kelly first found her.

“She’s a goal scorer,” Kelly said. “When you find somebody with that knack, it’s pretty unique. Lots of people can be athletic. Lots of people can beat people off of the dribble. To have the extra ability to use the right surface, strike it with the right amount of pace, chip it if necessary, texture it … she thinks about these types of things naturally.”

As four-time defending league champions, the Longhorns (16-1, 6-0 heading into Wednesday’s match at Kansas State) were expected to be in this spot. Kansas was not. The Jayhawks (18-0, 6-0), picked just fourth in the preseason poll, have thrown everyone for a surprise behind big seasons from Connally’s Kelsie Payne (3.95 kills per set) and Pflugerville’s Madison Ridgdon (3.10 kills per set).

Kansas ranks second nationally in hitting, one spot ahead of Texas.

Kansas and No. 1 USC are the only remaining unbeaten teams in the country.

Joffe returns to A&M: On Thursday, the women’s tennis team will head to College Station for the USTA/ITA Texas Regional Championships. It will be a homecoming of sorts for Howard Joffe, who coached Texas A&M for four years before resigning to take the Texas job in June. Joffe led the Aggies to three top-10 finishes, including a runner-up finish at the NCAA championships in 2013.

All 19 Division I schools in Texas will be there.

Texas’ best bet to advance to the national indoor championships is Breaunna Addison, who advanced to the second round of the ITA All-American Championships this month in Los Angeles.