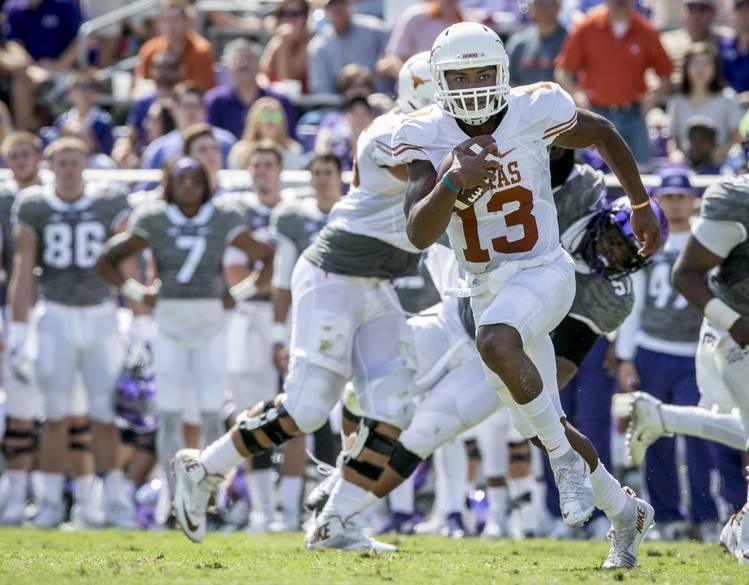 After clearing the way for 300 yards rushing for the first time under Charlie Strong, Texas’ offensive line appears to be in good shape after the Oklahoma win. And it gets better. Right tackle Kent Perkins, who is maybe the unit’s top performer, is expected to return after missing two games with a knee injury. Kansas State is stout up front, leading the Big 12 in rush defense at 126.3 yards. That may be misleading, though, as opponents are willing to forsake the ground game to attack KSU’s feeble secondary, which is surrendering 298 yards through the air.

Weather permitting, this seems like a perfect time for Heard to reignite Texas’ passing attack. The past four teams to face K-State have all thrown for 300 yards, and Oklahoma had five touchdowns through the air a week ago. Texas play-caller Jay Norvell’s effort to improve the passing attack (ranked No. 118 nationally) is bolstered by the expected return of speedster Daje Johnson, who missed the OU game and almost all of the TCU game with a concussion.

Jefferson recorded his first two sacks against OU and is now tied with Hassan Ridgeway for the team lead. Out of necessity, Jefferson is playing inside linebacker, though his speed is best suited on the outside, where he can rush the passer. After attacking Sooners quarterback Baker Mayfield from all angles, defensive coordinator Vance Bedford said this week that he expects to dial up more pressure as the season goes on. This could mean good things for Jefferson, and bad things for K-State QB Joe Hubener.

This series has been unkind to Texas, which trails 9-6 overall and has dropped six of seven meetings. A year ago in Manhattan, Kan., the Longhorns were shut out for the first time since 2004 (Oklahoma) and gained just 196 yards. In 10 drives, UT punted eight times and fumbled once. The last time these teams played in Austin, Johnathan Gray ran for 141 yards and two touchdowns in a 31-21 Longhorns victory that kick-started a six-game winning streak in the 2013 season.

After piecing together their finest effort of the season against OU, the Longhorns had to wait two weeks to build on it. Though the break may have stunted momentum, it also gave a chance for several players to heal from injuries, including offensive linemen Kent Perkins, Sedrick Flowers and Connor Williams, and receiver Daje Johnson. All things considered, Texas is a healthy bunch; linebacker Ed Freeman is the only player who began the season healthy that is expected to miss the game. Compare that to K-State, which is dealing with a rash of ailments in the secondary and at quarterback.