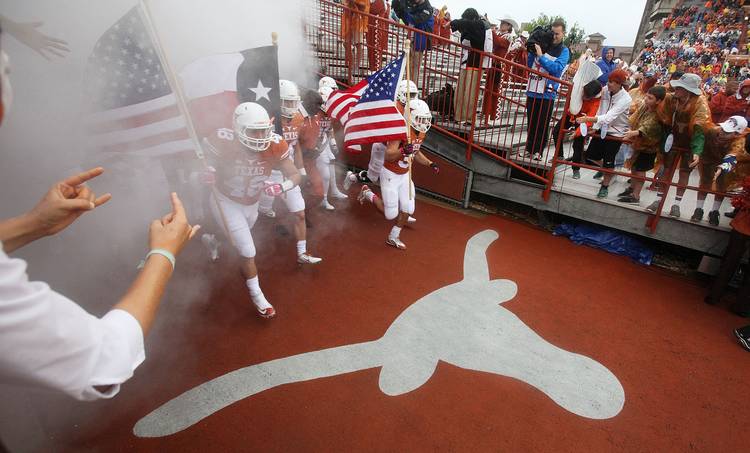 Head coach Charlie Strong and play-caller Jay Norvell played it conservative for much of Saturday’s game, but rolled the dice on a third-and-1 at the Texas 39 with less than five minutes to play, trying to protect the lead and milk some clock. Tight end Andrew Beck was open in the right flat, but Tyrone Swoopes threw behind him for an incompletion to allow Kansas State one more realistic shot at the win.

Strong and Norvell have used the quarterback tandem nearly to perfection. Jerrod Heard didn’t commit a turnover and Swoopes ran for three touchdowns and directed the final drive to put the game away.

It’s a problem if you have the choice of two. Take your pick between Kyle Ashby’s awry snap to the holder on the botched extra point in the second quarter or his high snap over punter Michael Dickson’s head on the second play of the fourth quarter.

There weren’t many, but Jerrod Heard’s floater to Caleb Bluiett for 28 yards late in the third quarter marked the first downfield completion by the Texas quarterback in the entire game.

Johnathan Gray broke free for a 46-yard sprint to the 2-yard for his longest run of the year, though Swoopes finished it off with a short touchdown run. Gray had 89 yards by halftime.

Swoopes ended the first half with four carries for minus-2 yards, but he did have both of the Longhorns’ touchdowns.

On a kick return in the second quarter, Kansas State’s Morgan Burns was pushed out of bounds on his own sideline and he took out the legs of Bill Snyder, upending the legendary coach.

The opening quarter of the game barely lasted half an hour and Texas didn’t even have the ball two complete series.

K-State’s Snyder played it conservatively in the early going, deciding not to go for it on fourth-and-2 at the Texas 42 and punting instead. The Longhorns responded by driving 80 yards for their first score.

Texas opened up with a 15-play drive, 14 of which were on the ground. The drive stalled after one pass fell incomplete in the end zone; the Horns settled for a field goal.

With a steady drizzle all morning long, there weren’t a thousand people in the stands at Royal-Memorial Stadium a half hour before kickoff. Understandably so. And UT officials listed only distributed tickets, not turnstile numbers. Understandably so.

Texas safety Jason Hall laid the lumber on Kansas State quarterback Joe Hubener on the very first play of the game, shaking him up and sending him to the visitors’ sideline.

Texas vs. Kansas State: Horns up, Horns down, plays of the game