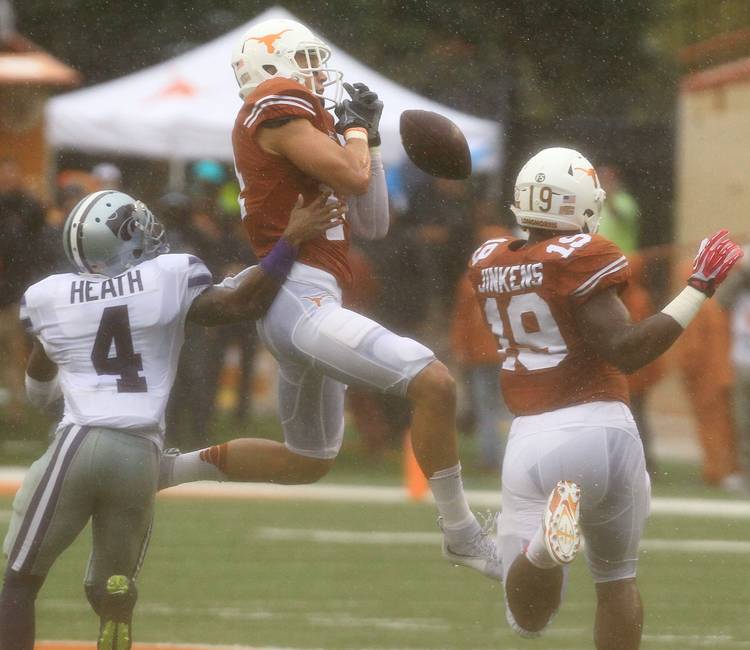 Charlie Strong didn’t control the weather on Saturday, but it didn’t stop his team from controlling every phase of the game against Kansas State.

“I can’t stop the rain,” Strong said he told his team during pre-game warmups. “I can’t move the clouds. Let’s just get into it and stop going through the motions.”

Still, the rain made an impact on the game.

Texas quarterback Jerrod Heard said the ball, soaked from the consistent downpour, felt like it weighed five pounds. So with Heard limited by the weather, Texas leaned on its running game. Constructing the game plan with a weather forecast projecting several inches of rain forced Longhorns play-caller Jay Norvell to play the waiting game.

“We made preparations,” Norvell said. “You never know how it’s going to be. Half the forecasts aren’t correct. It’s a balance of using the forecast and using the best judgment you can.”

Norvell didn’t adjust the entire offense to compensate for the weather, but he did make an alteration Saturday morning. It came in handy on the Longhorns’ last drive, which culminated with a Tyrone Swoopes 10-yard run that put the game out of reach.

With the wind, cold and rain bearing down, Texas’ defense shined by limiting Kansas State to 242 yards. Wildcats quarterback Jay Hubener finished with 97 yards, one touchdown and one interception. And if it wasn’t for the wet ball, there might have been two or three more interceptions. Texas safety Dylan Haines dropped a pass in the third quarter that would have likely ended with a return for touchdown.

Haines had a clear path to the end zone. Instead, the ball slipped through his wet mitts.

“It’s obviously difficult,” Haines said. “We could have three picks on the day and ended up as one. It’s always hard. I think overall it helps the defense because of how the offense has to handle the ball.”

Perhaps the weather played a part in a pair of special teams miscues. Rose didn’t have a chance to convert the extra point in the first quarter because the snap was high. And punter Michael Dickson, weeks after his costly mistake against Oklahoma State, found himself in a similar spot.

As his team exited the soaking wet field, Strong saw a team comfortable winning regardless of the weather condition.

The rain was still pouring, but Texas seems to be on the rise.

While others fear worst, Michael Dickson gets off big kick