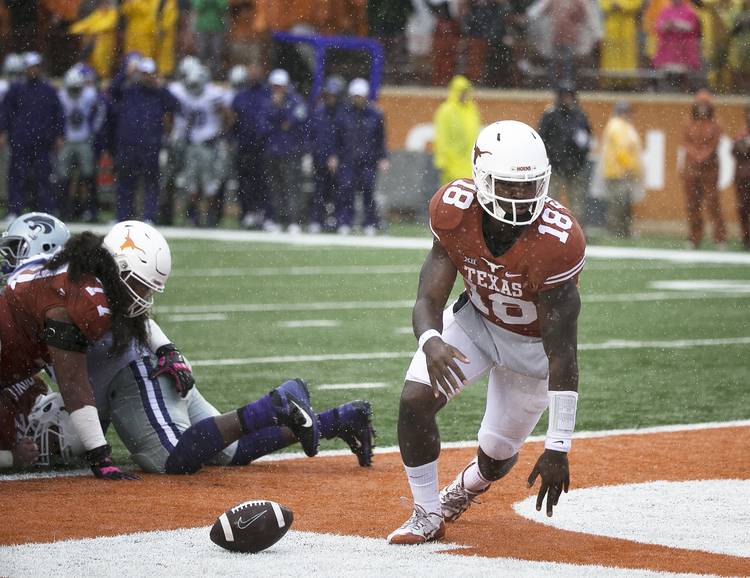 Here’s a question that’ll get the brainwaves moving: Is Tyrone Swoopes’ the offensive MVP for Texas?

Before poo-pooing that, consider this: Swoopes has played a direct role in seven of the Longhorns’ last eight offensive touchdowns.

Swoopes (50 yards on seven carries) was among four Longhorns with at least 43 rushing yards. He attempted one pass, but Andrew Beck dropped it on third down.

“When we go out there, everybody kind of knows what’s going on, so our offensive linemen, the running backs, the tight ends, do a great job of blocking,” Swoopes said. “We just go out there and do our thing.”

Swoopes, who lost his starting job before week two, has five touchdowns rushing and two passing.

Gray clears 100: Swoopes may have been the one crossing the goal line, but someone had to get him there. Johnathan Gray gets credit for that, as he rumbled 46 yards in the second quarter to set up Swoopes’ 2-yard score.

Gray hit the century mark for the first time this season and sixth time overall, totaling 103 yards on 18 carries. He’s done well against K-State, posting a career high 141 yards against the Wildcats two years ago.

“Finally,” Gray said of reaching triple digits. “It was a lot of relief. Guys were clicking on all cylinders. The offensive line looked great.”

Gray is now 167 yards shy of surpassing Hodges Mitchell for 10th all-time in rushing at Texas.

Gloomy day: Longhorns coach Charlie Strong took one look at his team’s disinterested approach to pregame warmups and had a bad feeling. So he brought them together and asked, “Do you want me to move the clouds?”

It may have been a sign of Strong maturing as a coach. Last year, he didn’t like what he saw before the BYU game and then openly regretted not ordering his team back to the locker room. The Longhorns lost, 41-7.

“We were sloppy. Nobody was excited,” linebacker Peter Jinkens said. “But by the first play of the game, you couldn’t tell we weren’t ready to play.”

Short yards: There was a moment of silence before the game for Bevo XIV, who died last week after a battle with Bovine Leukemia Virus. A memorial was erected in the northwest corner of DKR where Bevo was stationed for games. … Edith Royal, celebrating her 90th birthday, went out for the coin toss and had a nice chat with K-State coach Bill Snyder. … Receiver Daje Johnson (concussion) and right tackle Kent Perkins (knee) returned from injuries. Linebacker Breckyn Hager (ankle) did not suit up. … Texas’ five sacks were made by Jinkens, Bryce Cottrell, John Bonney, Derrick Roberson and a shared sack by Paul Boyette and Malik Jefferson.

While others fear worst, Michael Dickson gets off big kick