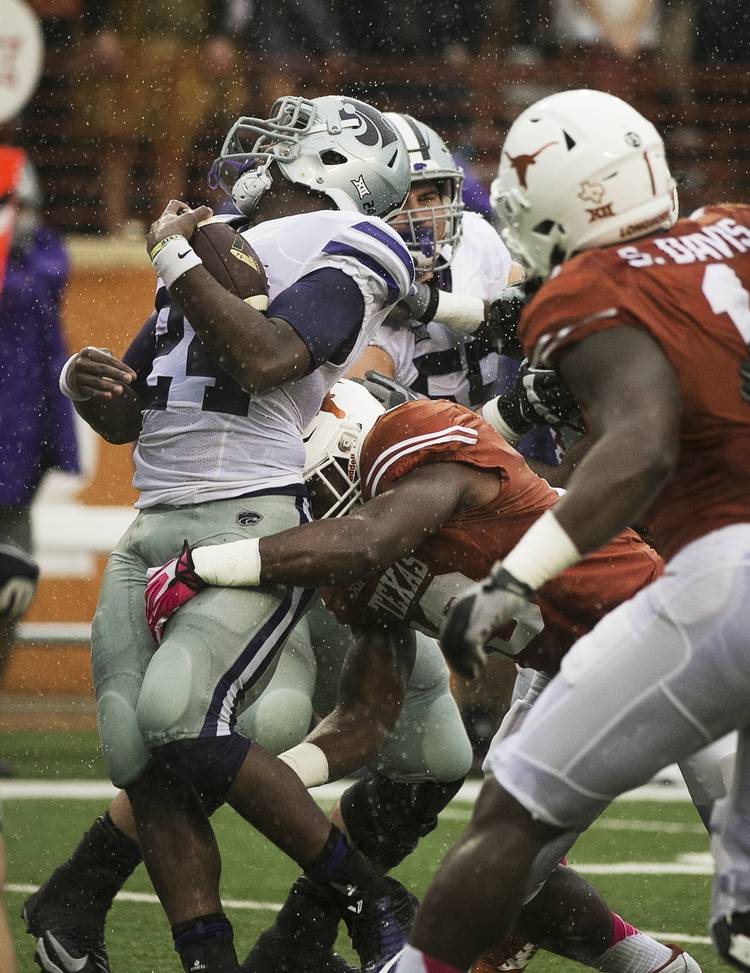 WHY TEXAS (3-4, 2-2) WON: It wasn’t pretty, but when you’re talking about Kansas State, a win is a win. The Longhorns prevailed because their running game was on (274 yards, an average of 5.2 yards per carry) and the defense stifled the Wildcats for most of the day. And Texas’ rushing performance came against the Big 12’s top-rated run defense. Jerrod Heard was pretty good, at least with his feet, and Tyrone Swoopes had perhaps his finest game of the season. Despite the rain, despite the small crowd, and despite the sloppiness, Texas found a way.

WHY KANSAS STATE (3-4, 0-4) LOST: Perhaps riding Charles Jones more in the fourth quarter would’ve been the wiser play. He finished with 18 carries for 122 yards, but was abandoned from the fourth quarter game plan on the Wildcats’ final two drives. After rushes of 9, 3, 7, 15 and 22 yards on their first two drives of the quarter, he had only one carry on the final two drives. He appeared to be getting stronger just as K-State went another way. Joe Hubener (10-22-97, 1/1) struggled in the passing game and wasn’t any more effective as a runner (15 carries, 18 net yards), and the Horns had five sacks. And the Wildcats converted only 28 percent of their third-down conversions.

THE EYES OF TEXAS: … were on three specific Wildcats — receiver/backup quarterback Kody Cook, a versatile playmaker; defensive end Jordan Willis, who leads K-State in tackles for loss; and quarterback Joe Hubener, who had gone three games without a touchdown pass. How’d they do? Hubener finally got his TD toss, but was knocked out of the game twice, was sacked four times and struggled statistically. Cook was held without a reception, and fared only marginally better as a quarterback (1 pass for 10 yards, and minus-3 yards rushing). Willis was quiet on the day (two tackles), but did add one tackle for loss.

Offense — Let’s go with Johnathan Gray (18 carries, 103 yards), who’s only 167 yards away from 10th place all-time on the UT rushing list. But Tyrone Swoopes and his three rushing TDs were a close second.

Defense — Let’s go with Dylan Haines, whose game-sealing interception in the fourth quarter nearly was his third pick of the day (he had only one, though). But Jason Hall, who tied for the team lead in tackles and delivered a couple of big hits, was a close second.

Cheers …
(1) Michael Dickson, bless his heart, had another punt snap breakdown. But this time, his desperation boot went for 33 yards down to the 8.
(2) Johnathan Gray ran hard throughout the game after taking a back seat to D’Onta Foreman’s back-to-back 100-yard games against OU and TCU. Gray led Texas in all-purpose yards.
(3) Peter Jinkens. The linebacker’s had a solid season and added a sack and a solid hit to stuff a running back on another play.

Jeers …
(1) … to the announced attendance of 88,283. No way. Those were “tickets distributed.” (But cheers to the 40,000 or so — our guess, anyway —  that actually showed up.)
(2) Special teams snaps. What’s the problem here? One Kyle Ashby PAT snap was high, which Trey Holtz couldn’t handle. Another Ashby punt snap sailed over Michael Dickson altogether.
(3) The passing game. The Horns had their second straight sub-100 yard passing game. Good thing that the running game is clicking.

Texcetera: Dylan Haines had this third interception of the season, which was also the seventh of his career. … Kudos to the offensive line, which allowed only one sack. That’s a season-low. … Texas is now 9-1 under Charlie Strong when it scores first. Sounds like a plan, doesn’t it? … Swoopes accounted for all 52 yards on the game-clinching touchdown drive of the fourth quarter, including the 29-yard run and the 10-yard scoring run. … Kansas State has been shut out in seven of its last eight quarters.

Bests and Worsts from Texas-Kansas State