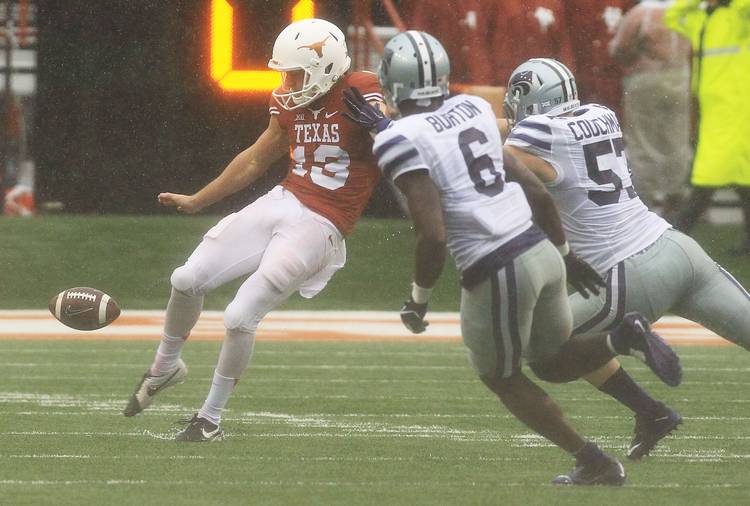 Texas' Michael Dickson (13) kicks ahead of pressure from Kansas State?s Deante Burton(6) and Colborn Couchman(57) landing the ball within the 5-yard-line during their NCAA college football game at Royal-Memorial Stadium Saturday, Oct. 24, 2015. (Stephen Spillman for AMERICAN-STATESMAN)

Reactions to yet another special teams snafu were consistent along the Texas sideline.

As he watched Kyle Ashby’s punt sail over the intended target, coach Charlie Strong thought to himself, “Oh God, here we go again.”

Peter Jinkens had seen this story before, too.

Yet Michael Dickson allayed concerns with a splendid individual effort to bail out his deep snapper in the fourth quarter of Saturday’s 23-9 win over Kansas State.

Until then, Dickson had gone through his freshman season being known best for his slippery delivery in crunch time against Oklahoma State. The ball squirted through his hands, leading to a late game-winning field goal for the Cowboys.

So, yes, the fears of his teammates and the 40,000 or so rain-soaked fans at Royal-Memorial Stadium were to be expected on Dickson’s harrowing adventure early in the fourth quarter. But he responded like a seasoned pro, not someone playing in just his seventh game of American rules football. Dickson retreated to K-State’s 32-yard line and stalked the ball as it took a funny bounce to his left. He scooped it, and with an opponent zeroing in on him, uncorked a 33-yard kick to the Wildcats’ 8.

“He made an awesome play on the ball,” Jinkens said.

Dickson, who was delivered to Texas by the kicking incubator Prokick Australia, credited his background in Australian rules football for his even temperament when everything appeared to be going haywire. Dickson considered falling on the ball, which would’ve given K-State’s offense a short field in a seven-point game, but he made a split decision that the benefit of getting off a good kick outweighed getting smashed.

“I had to wheel around and get it on the foot,” Dickson, of Sydney, said. “A bit of the Australian rules kicked in. If I could pick it up, I’d get it on the boot and that wouldn’t be an issue. I was hoping there wasn’t someone on me.”

That kick was merely one of three excellent plays made by Dickson in the fourth quarter alone. On the next drive, he hit a high shot to the right corner of the south end zone that Kris Boyd knocked from the goal line to inside the 5. But Boyd hit it too delicately, and the ball rolled into the end zone before a Longhorn could corral it. Following a three-and-out on the next possession, Dickson stepped into a kick of 51 yards that landed at K-State’s 20.

Dickson averaged 37.0 yards on six punts, all of which came in the second half.

The way the final quarter unfolded for Dickson was a stark contrast to the OSU game on Sept. 26. Dickson admitted he was “down for a couple of days.” He was picked back up by Blake O’Neill, a Michigan punter from Australia who messaged Dickson and told him to “keep your head up.”

Last week, it was Dickson’s chance to do the same after O’Neill muffed a snap that Michigan State returned for the winning touchdown on the final play of that rivalry game.