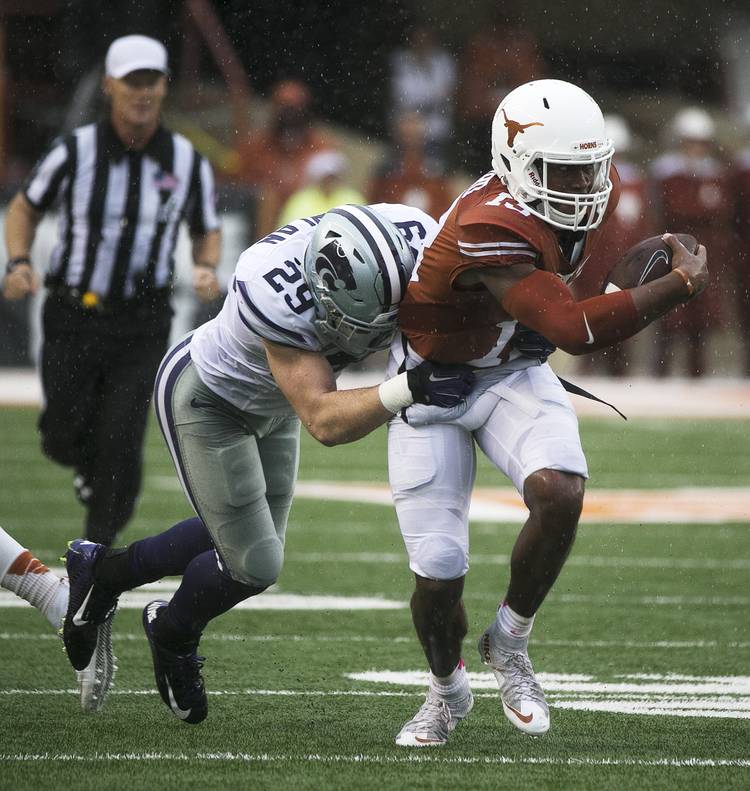 Texas's Jerrod Heard is grabbed by Kansas State's Sean Newlan during the first half of their game at Royal Memorial Stadium on Saturday, October 24, 2015. DEBORAH CANNON / AMERICAN-STATESMAN

There were 130 snaps taken in Texas’ 23-9 win over Kansas State on Saturday.

The weather was miserable, forcing all but about 40,000 fans to stay home. This had the chance to be a real yawner, an obvious favor to the visiting team. But it didn’t take long for everyone to wake up as Jason Hall destroyed K-State quarterback Joe Hubener on the first play. Hubener was wobbly and briefly left the game. FS1’s Joe Davis said “it could not be a more nightmarish start for Kansas State.” And to think, Longhorns coach Charlie Strong pulled his team aside and laid into them because they looked unenthused in pregame warmups.

In these rainy conditions, it was imprudent to throw the ball unless necessary. Third-and-12 seemed like one of those rare times to let one fly downfield, but Jerrod Heard instead kept it on a read option and found a crease down the Texas sideline. Needing two more yards, he carried safety Sean Newlan over the marker for 13 yards, and Texas finished the drive with a Tyrone Swoopes touchdown to go up 16-0. FS1’s Brady Quinn said anytime Heard can get to the edge Texas views it as a passing play because of Heard’s elusiveness. It wasn’t the only time Heard kept the ball on an obvious pass situation; he used his feet to convert a couple of third-and-8s in the first half.

Safety Dylan Haines dropped an easy interception that, had he come up with it, would’ve likely resulted in a back-breaking pick-six. With only linemen to beat to the end zone, Haines could’ve put UT ahead by three scores in the third quarter, something K-State’s struggling offense would’ve had a difficult time overcoming in the rain. Instead, on the next play the Wildcats kicked a field goal to cut their deficit to 16-9.

Davis, the FS1 announcer, jinxed Texas when he started to remind viewers about the end of the Oklahoma State game when punter Michael Dickson botched an exchange that led to the game-winning field goal for the Cowboys. Considering the conditions, which had already caused snapper Kyle Ashby to botch an extra point snap, it was a fair point to make. Sure enough, it happened, but Dickson recovered like a champ, hustling to the over-snapped ball and twisting back around for a 33-yard punt. Had Dickson fallen on the ball, which he considered doing, K-State would’ve had the ball at UT’s 32 trailing by a touchdown to start the fourth quarter. “Play of the game by the freshman from Australia,” Davis said.

Given a second chance at a gimme interception, Haines came through to all but seal the victory. Credit Paul Boyette for pressuring Hubener into the overthrow that resulted in Haines’ seventh career interception. From there, Swoopes finished things up with his third rushing touchdown of the day.

Longhorns believe this is how it should’ve looked all along