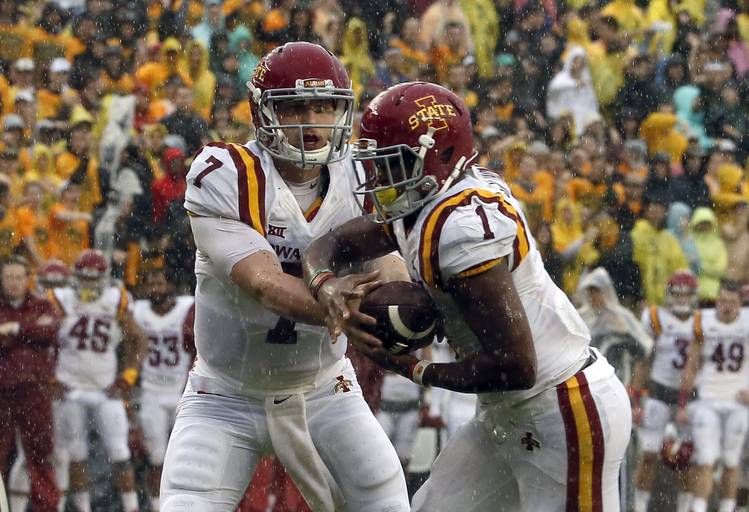 Iowa State quarterback Joel Lanning (7) hands the ball off to running back Joshua Thomas (1) in the first half against Baylor on Saturday, Oct. 24, 2015, in Waco, Texas. (AP Photo/Tony Gutierrez)

“Our punter was conference player of the week,” Texas coach Charlie Strong said Monday. “What about that?”

It’s true. Michael Dickson, the right-footed Australian who received blistering criticism for dropping the snap against Oklahoma State, was honored by the Big 12 office on Monday for his critical punt late against Kansas State.

Strong’s bunch is now winning special teams awards, and Texas is a seven-point favorite this week against Iowa State, a 2-5 team that ousted its offensive coordinator and changed starting quarterbacks Monday.

Strong got his sports information director, John Bianco, back on Monday, too. The 23-year UT employee was fired by former athletic director Steve Patterson in June, but interim AD Mike Perrin reversed that unpopular decision. Bianco goes back to work immediately.

Things are going so well, even ESPN has changed its tune. Three weeks ago, network announcers questioned whether Strong was the right man for the job. On Monday, Strong dismissed an ESPN report that he would listen to an overture from University of Miami officials.

“I have the best job in the country,” Strong said. When pressed, he gave a hearty laugh and said, “No, I’m not going to Miami.”

There wasn’t a lot said about the Cyclones during Monday’s press conference. On paper, if one had no knowledge of recent Iowa State-Texas scrums, this game sounds like a real treat come Halloween night.

“We know Iowa State is not a very good team,” defensive tackle Paul Boyette said. “I’m not taking anything away from them. But they can come out one week and put up numerous points, and the next week, they can be flat.”

Where’s all this confidence and swagger coming from? There’s certainly a new atmosphere inside the football complex. Winning has a way of doing that.

Asked whether his 3-4 team had indeed turned the corner, Strong said, “We’ve got to do a better job throwing the ball. Once we improve there, we’ll be OK.”

Quarterback Jerrod Heard has averaged 66.7 passing yards over the past three games. Strong and play-caller Jay Norvell both acknowledge the bad weather affected things against Kansas State. But Norvell seemed nonplussed about the overall state of the passing game afterward.

“We’re not happy with our overall play, but we’ve been working well,” Norvell said.

The Horns are still getting their sea legs as a physical team crafted in Strong’s vision. The locker room has grown incredibly close this month, several players said. Nobody’s too excited just yet, receiver Marcus Johnson said. Texas does still have a losing record, after all.

“Overall, I feel like we’ve grown and we’ve made those strides that we needed to make,” Johnson said. “But at the same time, it doesn’t indicate anything. Every week, something different may happen.”

Lanning will take direction from passing game coordinator Todd Sturdy this week. Mark Mangino abruptly left the Iowa State program Monday after a conversation with head coach Paul Rhoads, who would not say whether Mangino was fired or quit.

“Mark and I couldn’t get on the same page on a few important items,” Rhoads told reporters.

Texas looked like a completely different team against Rice in Week 2 after changing its play-caller and quarterback. Iowa State hopes the same transition happens against Texas.

That’s why the Horns, while confident, shouldn’t take the Cyclones lightly.

“We know everyone in this league can play,” center Taylor Doyle said. “We’re fully expecting Iowa State to come out there ready to go and play hard and play well. We know we have a challenge ahead of us.”

Longhorns believe this is how it should’ve looked all along

Notebook: Kent Perkins is healthy — but was he ever hurt?