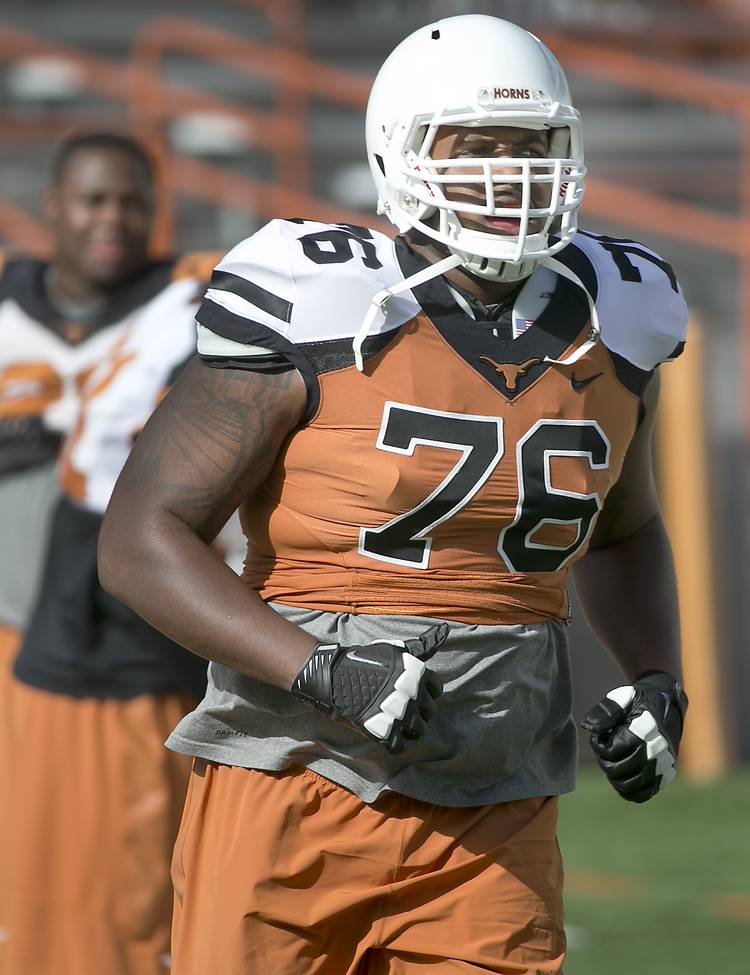 “I’m giving him a hard time,” Doyle said Monday. “I don’t even know if he had an injury ‘cause he didn’t miss a beat out there.”

Perkins, who missed two full games and the fourth quarter of another, was named the Longhorns’ offensive MVP in Saturday’s 23-9 win over Kansas State.

With his mother’s initials written on his wrist tape for her birthday, Perkins helped pave the way for 274 rushing yards and three Tyrone Swoopes touchdowns amid a steady downpour at Royal-Memorial Stadium.

“He was blocking his assigned guy every play,” Doyle said.

Dickson honored: Michael Dickson, who may have saved Saturday’s game with a a 33-yard punt after a bad snap, was named Big 12 special teams player of the week.

“I guess he saved us on that one kick there,” Strong said.

Dickson, 22, of Sydney, Australia, was a latecomer to the freshman class. Strong attributed the maturity that comes with Dickson’s age to his coolly picking up a loose ball and punting it away to avert disaster.

Dickson had two other fourth-quarter punts of 45 and 51 yards.

“I didn’t know he was 22 years old,” wide receiver Marcus Johnson said. “Regardless, this is his first time playing (American) football. He has all the ability in the world. We sit back in practice and watch him kick 70-yard punts.”

Changes at ISU: Like Texas in week two, Iowa State announced changes at quarterback and play-caller in advance of Saturday’s homecoming game against the Longhorns.

Before coming to ISU in 2012, Sturdy was Washington State’s offensive coordinator and authored the nation’s ninth ranked pass offensive in his final season.

The move is viewed as a possible precursor to head coach Paul Rhoads being let go. Rhoads hasn’t had a winning season since 2009, his first season at ISU, and he’ll need to win his final five games to end that trend.

“Very versatile,” Strong said. “Can run the ball. Also has a really good arm. Their receivers made great plays. We have to do a great job of covering.”

Foreman OK: Strong said running back D’Onta Foreman hurt his toe, “but it’s not serious.” Foreman, who had 43 yards on 10 carries, is wearing a protective boot, but Strong said “he’ll be ready to go.”