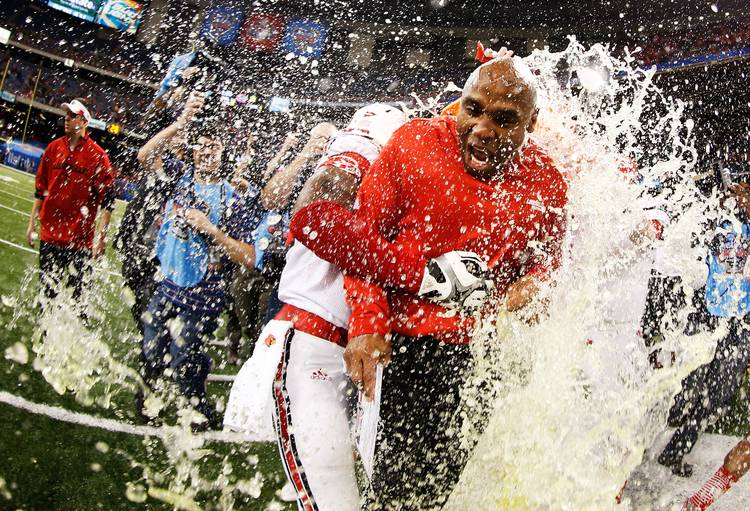 Charlie Strong's Louisville program was off and running after the 2011 season. The 2012 Cardinals reached the Sugar Bowl and defeated No. 4 Florida in one of Strong's best wins as a head coach. (Photo by Chris Graythen/Getty Images)

The Cardinals had 13 sophomores or freshmen listed among the starting 22 at the time. The Longhorns have 10, but as UT fans know, even more are regularly rotating in on Saturdays.

Strong took Louisville to championship levels in Years 3 and 4. There are no guarantees that will happen at Texas. Step back and examine the bigger picture, and it becomes clear the Longhorns’ two-game winning streak may be a harbinger of bigger things ahead.

“It takes time,” senior receiver Marcus Johnson said. “Fans sometimes are impatient, and they don’t want to hear that. But it takes time, and I think we’re headed in the right direction.”

Fans are starved to know when their team will become a Big 12 force again. Louisville fans probably felt the same way after the Cardinals went 7-6 in 2010. It’s the same program that went 12-1 in 2006 and won the Orange Bowl.

In 2011, Strong’s Cardinals started the year 2-4. Coaches and players called a team meeting after a 25-16 loss to Cincinnati. Strong’s bunch must have felt snake-bitten. The Bearcats fumbled four times and recovered all of them. Louisville had been outscored 42-7 in the second half of the three previous games.

“It was a players-only (meeting), kind of what we had here a few weeks ago,” Strong recalled on Monday. “They kind of got it together. They kind of got things solved. We started playing a lot better, went on a run.”

The Cardinals found themselves a star in freshmen quarterback Teddy Bridgewater that year. Cornerback Calvin Pryor and defensive end Marcus Smith, along with Bridgewater, went on to become first-round draft picks in 2014.

Fast forward to what’s happened here. Strong suffered a monumental setback in his debut game when quarterback David Ash suffered a career-ending concussion. Shawn Watson’s plans for a ball-control offense had to be scrapped as the team developed an inexperienced Tyrone Swoopes.

Texas squeezed the most from a handful of future defensive draft picks and finished 6-7.

This season, redshirt freshman Jerrod Heard made his debut in Week 2 and simply dazzled. He totaled a school-record 527 total yards against California in Week 3 and earned the job for good.

It hasn’t been perfect, though. Heard’s passing totals in recent weeks leave something to be desired. Still, the Horns found success in two straight wins doing what Strong always envisioned — running a downhill, run-oriented offense and playing physical defense.

Texas is 3-4 overall, but the win over 10th-ranked Oklahoma served as a breakthrough moment. Years from now, Johnson’s take-no-prisoners 24-yard touchdown run may prove to be the moment Strong’s program really took flight.

Remember, that game was just seven days after the dismal 50-7 loss to No. 4 TCU. The team held its first clear-the-air meeting just after the plane touched down in Austin. Players held another meeting the next day.

Then on Monday, younger players were sniping at each other on Twitter. National pundits questioned whether Strong was the right coach for UT.

“When we went into the OU game, it was a crazy atmosphere. I ain’t going to lie,” defensive tackle Desmond Jackson said. “It was kind of crazy around here for a little bit, just how guys weren’t focused, worried about other things and mad and upset. But we all came together as a unit.”

Winning breeds confidence, several players said. If Strong has told players once, he’s told them hundreds of time, “You have talent.” They may finally believe him.

Tight end Caleb Bluiett tweeted a photo of himself hugging his head coach and said, “If you only knew half the conversations we have had with this man, you wouldn’t be able to contain the laughter.”

If you only knew half the conversations we have had with this man, you wouldn't be able to contain the laughter. pic.twitter.com/kT6VGhVC59

Strong side-stepped questions about whether he’d proclaim the Longhorns have indeed turned the corner. They definitely know where they’re headed, though.

“The thing about it is these guys here, they want to win,” Strong said. “They’re working. Like I said, now you can see it coming together. You can see now the older guys are accepting the young guys.”