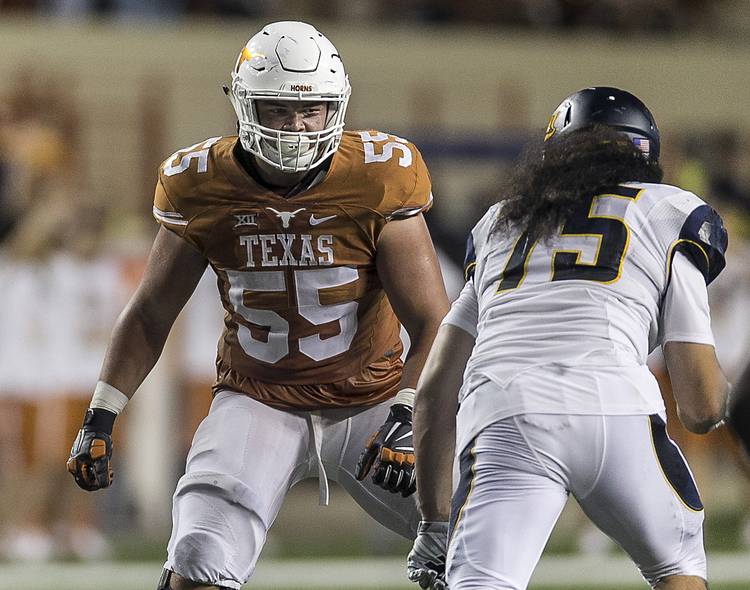 Except for maybe Patrick Vahe.

Norvell spent much of Tuesday’s press conference lavishing praise on Williams and Vahe, calling the newcomers “as unique as I’ve been around in 30 years of coaching.”

“Williams has two rare qualities for a young kid,” Norvell said of the left tackle from Coppell. “He’s extremely intelligent, and he’s extremely competitive. And he’s physically talented, which for a freshman is highly unusual. For him to play left tackle, to not worry about him is really rare.”

Norvell then switched to Vahe, the right guard.

Williams and Vahe have skipped the patient path taken by most young linemen and have started all seven games for the Longhorns, whose wins over Kansas State and Oklahoma the past two games were the function of improved play by the line. Texas (3-4, 2-2 Big 12) looks to even out at .500 at Iowa State on Saturday.

Norvell said when pro scouts visit Texas they cannot tell the difference between Williams and Vahe and the veterans on the line. And that’s no knock on Taylor Doyle, Sedrick Flowers or Kent Perkins.

“You can’t tell us who the freshmen are if you don’t know,” Norvell said.

Bulldozer vs. 18-Wheeler: In six games since replacing Shawn Watson as play caller, Norvell’s signature move is clearly installing the “18-Wheeler” package for backup quarterback Tyrone Swoopes. It has its roots in Oklahoma, where Norvell was an assistant when the “Belldozer” was put in for quarterback/tight end Blake Bell.

How do they compare?

“Tyrone has more speed than Blake Bell ever had, and that’s not a knock on Blake,” Norvell said. “Tyrone is a unique athlete. He’s a big, physical, competitive guy, and the things that we’re doing with him are really natural for him. He’s had some tremendous runs.”

Against K-State, Swoopes ran for all three of Texas’ touchdowns, including the game-clincher.

“It takes a great feel to sift your way through it and find those hats to put bodies on,” Norvell said.

Short yards: It’s been a tough week for ISU’s coordinators. On Tuesday, a day after Mark Mangino was fired as offensive coordinator, defensive coordinator Wally Burnham took a cleat to his leg at practice and had to get 20 stitches. … ISU leading receiver Allen Lazard is expected to play after missing the Baylor game with an injury. Lazard has 29 catches for 406 yards and three touchdowns. … Norvell expects RB D’Onta Foreman (ankle) to play.

Close calls? Texas, Iowa State have had a few