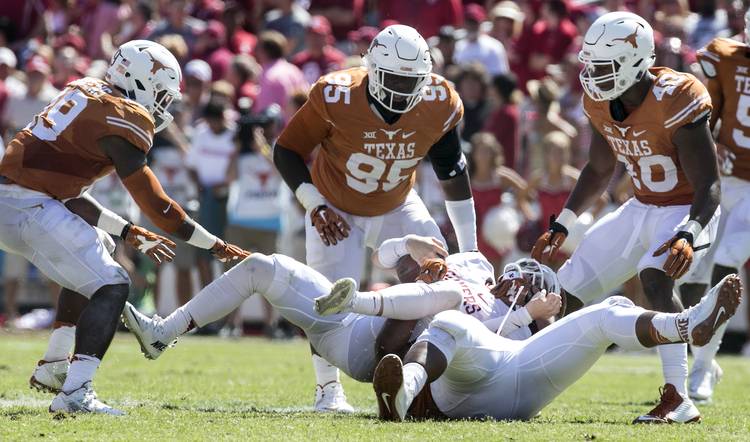 Texas coaches boasted about the strength of the defensive line this preseason, calling it the team’s best unit. Five games in, there wasn’t much to brag about anymore.

“We pressured early on in the year, and we weren’t every successful,” defensive coordinator Vance Bedford said. “Matter of fact, we were awful. Let’s be honest about it. We’ve gotten better. We’ve gotten more confident. The kids are believing now.”

It’s been documented how Ridgeway’s slow start was due to injuries. Poona Ford started firing after the first month. Shiro Davis was slowed against OU, and Hughes was sick last week, but both are ready for Iowa State, Bedford said.

Freshmen Holton Hill and Davante Davis are both listed at 6-2 on the roster. Another freshman, Kris Boyd, checks in at 6 feet tall, but he makes up the difference with attitude.

“I love me some Kris Boyd,” Bedford said. “He’s in my hip pocket on the sideline saying, ‘Coach, I’m ready. Put me in coach, I’m ready.’ That’s how you’re going to turn programs around, with the Kris Boyds of the world.”

Moving on up: Yet another major coaching job opened up Wednesday when Minnesota’s Jerry Kill announced he was stepping down for health reasons. Bedford’s name has been mentioned as a possible target when athletic directors go shopping this offseason.

“I learned a long time ago, your best job is the job you have and be the best at what you can be right now,” said Bedford, who has head coaching aspirations. “I don’t look ahead.”

Briefly: Bedford sidestepped a question about whether linebacker Malik Jefferson has been playing injured; the defensive coordinator sounded as if his unit was fully healthy. Linebacker Breckyn Hager (ankle) has returned to practice and could make the travel roster this week. … Iowa State’s new play-caller Todd Sturdy has been a quarterbacks, receivers and passing game coach with the Cyclones. He didn’t seem nervous about additional duties against UT. “I’ve called plays in so many games and I feel very comfortable doing it,” Sturdy told reporters in Ames.

Texas sports notebook: Breaunna Addison is healthy — so is her game