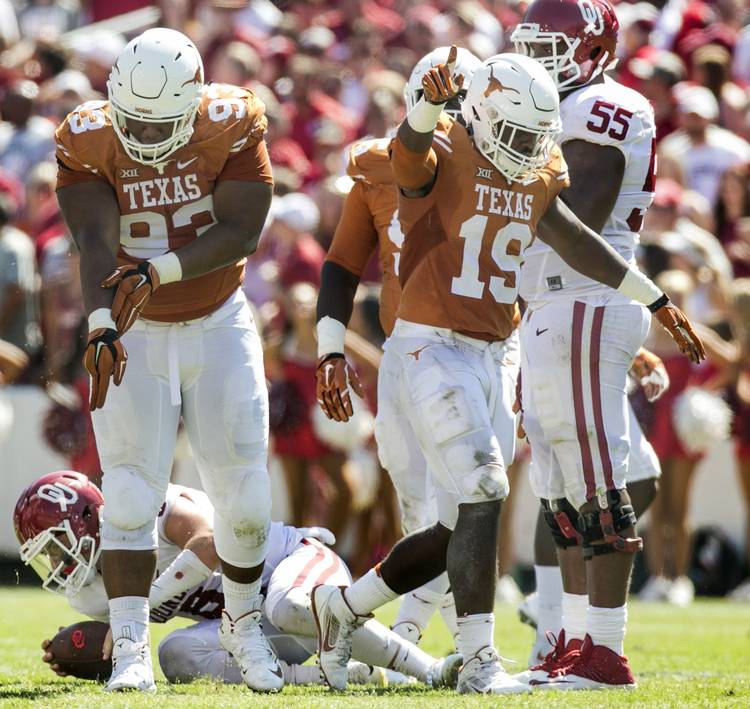 Giving up maybe 70 pounds, Texas linebacker Peter Jinkens locked into a battle with a Kansas State offensive lineman last Saturday and was thrown to the ground.

Jinkens stood up and motioned for a rematch, only to be interrupted by fellow linebacker Malik Jefferson, who managed to talk some sense into the senior.

Give Jefferson credit. It’s no small feat to calm down Jinkens, the resident “hype man” for the surging Longhorns, who have won two straight entering Saturday’s game at Iowa State.

Jinkens is known to bust out dance moves in the locker room. He tweets behind the handle @RIPS_SHIRT_OFF, which he registered as a junior in high school for reasons that are unclear. His fiery impersonation of pro wrestling legend Ric Flair was among the highlights of preseason camp. To celebrate his birthday this summer, Jinkens posted an invitation for his “Official Bday Kickback” with the promise of something called Ape Punch. In another possible nod to Flair, he lifted and viciously slammed a walk-on running back to the ground during an inside drill in preseason camp. (Jinkens later apologized to Gaston Davis.)

Know I had to do the Rick Flair one time 😂😂 pic.twitter.com/SLzfiGnywY

“Just energy,” receiver Marcus Johnson said. “He’s the guy with the spotlight, dancing at bowl games. He’s been like that since he got here, so there hasn’t been too much changed.”

One thing has changed: Productivity.

A career backup entering his senior season, Jinkens is looking the part of an all-conference performer, one who may end up commanding an NFL payday that would allow for bigger and better Bday Kickbacks. Through seven games, the Dallas Skyline product leads Texas (3-4, 2-2 in the Big 12) with a career-high 52 tackles and is tied for second with five tackles for loss.

“It’s his last go-round for college football, so he knows what he has to get done to get to the next level,” running back Johnathan Gray said.

Jinkens attributes his breakout to studying “a whole lot more” film than he’s done in past seasons, when he was limited to special teams and fill-in duty for injured starters.

“If you watch film, it will tell you what the team is gonna do,” Jinkens said.

For most of 2014, the defense rolled almost exclusively with Jordan Hicks and Steve Edmond at linebacker, which was not exactly a strong endorsement for veteran reserves like Jinkens. Another slight came in the offseason when head coach Charlie Strong added five new linebackers, including Jefferson — the state’s top player — to the program. The not-so-subtle implication was that Strong had little faith in what was coming back for his second season.

But competitions to replace Hicks and Edmond came together cleanly, with Jinkens and Jefferson pulling away from the field, which was thinned out by Dalton Santos’ season-ending ankle injury and Cecil Cherry leaving the program.

“Pete Jinkens is turning it on and having a really solid year for us,” Strong said.

Recently, Jinkens has started swapping spots with Jefferson and playing on the inside. That has allowed Jefferson, who is quicker than Jinkens, to rush off the edges, leaving Jinkens to clean up everything in the middle. As a result, Jefferson posted his first two sacks of the season against Oklahoma. The following week, Jinkens posted his second sack against Kansas State.

“He’s probably been the most consistent guy on the defense, and it’s great to sit back week in and week out and watch him play,” Johnson said.

His high energy is also consistent.

“It comes natural,” Jinkens said. “I’m a naturally exciting guy, in my opinion.”

Close calls? Texas, Iowa State have had a few