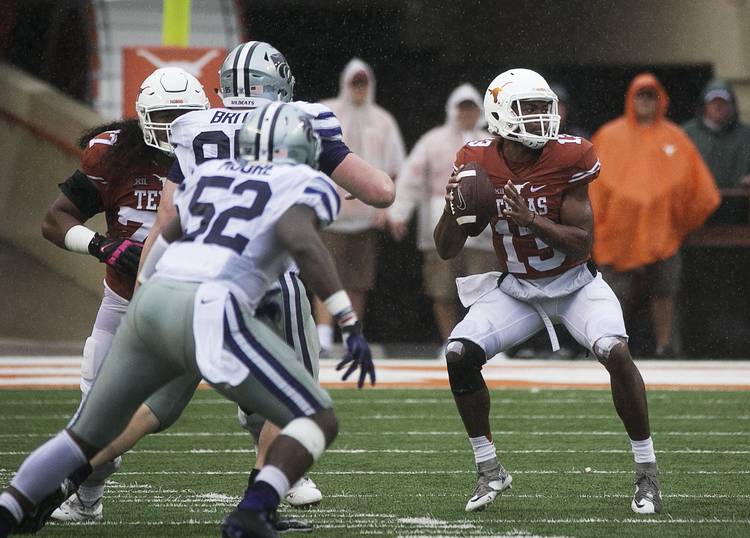 Texas's Jerrod Heard looks to pass against Kansas State during the second half of their game at Royal Memorial Stadium on Saturday, October 24, 2015. DEBORAH CANNON / AMERICAN-STATESMAN

That may be a low bar, but Heard hasn’t cleared it the past three games (K-State, 99; Oklahoma, 53; TCU, 48). The rap on Heard is he doesn’t complete the intermediary throws, so if he’s not hitting on deep passes to John Burt or Armanti Foreman, he isn’t hitting on much of anything. Lately, a big chunk of Heard’s passing yards have come on glorified handoffs to Daje Johnson and Marcus Johnson. A year ago, Tyrone Swoopes gashed Iowa State through the air for 321 yards, so maybe Heard too will find elixir in the Cyclones’ secondary.

2. Which freshman RB named Warren will have a bigger day?

The obvious choice is ISU’s Mike Warren, the Big 12’s second-leading rusher. But don’t overlook UT’s Chris Warren, who may be primed for a breakout due to the unsettled nature of D’Onta Foreman’s hurt ankle. This week, play-caller Jay Norvell said Warren (52 yards on 12 carries) is deserving of more touches, but Norvell also said Foreman is expected to play. Still, ISU’s Warren is the better guess; his 797 yards ranks tops among freshmen in the country.

Seems like a safe bet. Texas defensive coordinator Vance Bedford views young quarterbacks as vulnerable, and Lanning is making his first start after playing well in relief during last week’s loss to Baylor. The past two games, UT has 11 sacks and has inflicted minor injuries to quarterbacks Joe Hubener (K-State) and Baker Mayfield (Oklahoma). So there’s an argument for bringing pressure. However, with such little knowledge of Lanning to go on, Bedford may take a wait-and-see approach and build a gameplan on the fly.

4. Will Texas continue to protect the ball?

Overlooked in back-to-back wins is this impressive stat: Texas did not commit a turnover against Kansas State or Oklahoma. And the only mishap in that grotesque loss at TCU was reasonable, as UT lost a fumble when Daje Johnson was hit in the head and suffered a concussion. On the season, the Longhorns have turned it over just five times. Coupled with the defense forcing 12 takeaways, the team’s plus-seven turnover margin ranks 12th nationally. Iowa State is 100 spots lower, at minus-seven.

Texas sports notebook: Breaunna Addison is healthy — so is her game

Texas vs. Iowa State: The Eyes of Texas will be upon whom?