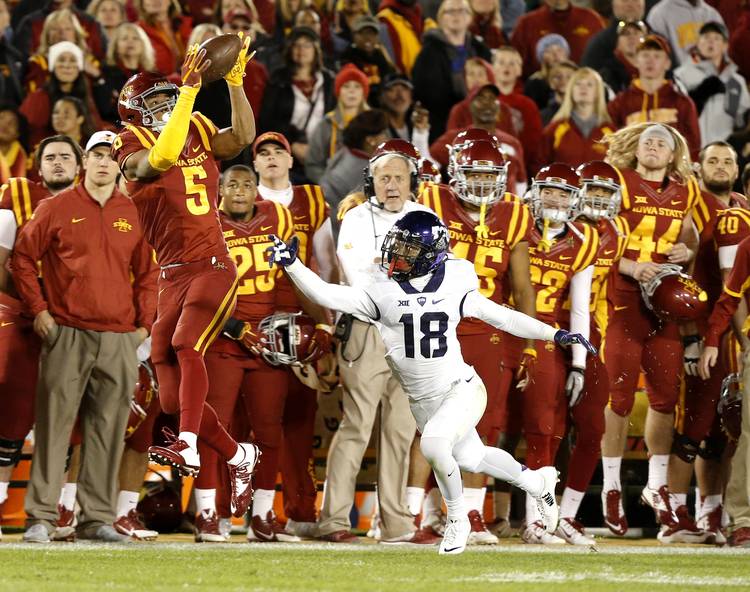 Iowa State receiver Allen Lazard (5) hauls in a reception over TCU safety Nick Orr in the first half of play at Jack Trice Stadium on October 17, 2015 in Ames, Iowa. (Photo by David Purdy/Getty Images)

Both coaches are relatively new to their roles. Norvell took over the play-calling duties with the Longhorns in Week 2. Sturley is now at the controls after Iowa State coach Paul Rhoads fired offensive coordinator Mark Mangino on Monday. Both teams rank near the bottom of the Big 12 in scoring. But Norvell gets the edge because he’s been at this for more than a month, and Texas has found a clear identity. If Charlie Strong had his way, the Horns would run 50 times and run straight back to the airport with a win.

What’s the best way to fix an ailing passing game? Go up against two of the Big 12’s worst passing defenses in back-to-back weeks. Iowa State has the league’s third-worst pass defense, having allowed 278.1 yards per game. Kansas, next week’s opponent, is last. Strong said this team can’t truly turn the corner until Heard connects more with Marcus Johnson and John Burt; the under-handed flips to Daje Johnson running around the end will get you only so far. Bigger games against pass-oriented teams are coming. Better get some work in now.

The Cyclones shouldn’t be so easily dismissed. Defensive end Dale Pierson ranks 11th nationally in sacks (6.5) and sixth in the Big 12 in tackles for loss (10). Iowa State already has 16 sacks this season, surpassing its entire 2014 total of 15. These are experienced players, too. Of Iowa State’s 16 sacks, 13 have come from junior college transfers. Texas’ two tackles, Kent Perkins and Connor Williams, have held their own rather well. Perkins looked solid against Kansas State coming back from a knee injury. Williams has looked great for a freshman.

This isn’t the typical matchup of Good Receiver X vs. Cornerback Y. Iowa State’s receivers have real length. Allen Lazard, the Cyclones’ top threat, is 6 feet, 5 inches tall. D’Vario Montgomery is 6-6, and tight end Ben Boesen checks in at 6-5. This is where the game is headed; teams are shifting back to the taller athlete who can leap over people. UT defensive coordinator Vance Bedford said he’s looking for taller recruits. For now, freshmen Holton Hill (6-2), Davante Davis (6-2) and Duke Thomas (5-10) must harass their opponents into losing focus.

Nobody made a big deal about it at the time, because Boyette was merely speaking his mind on Monday. “We know Iowa State is not a very good team,” the defensive tackle said. “I’m not taking anything away from them. But they can come out one week and put up numerous points and the next week, they can be flat.” The coaches may have cringed, but Boyette was telling the truth. Iowa State isn’t a good team that has not been consistent. Texas has developed an identity and the program is headed up. No need to apologize, Paul.

Texas vs. Iowa State: The Eyes of Texas will be upon whom?