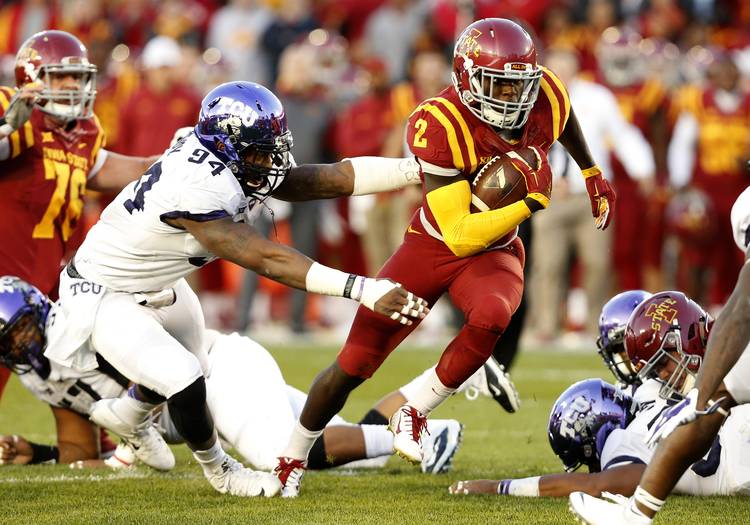 Running back Mike Warren #2 of the Iowa State Cyclones is tackled by defensive end Josh Carraway #94 of the TCU Horned Frogs as he rushed for yards in the first half of play at Jack Trice Stadium on October 17, 2015 in Ames, Iowa. (Photo by David Purdy/Getty Images)

On Saturday against Iowa State, the eyes of Texas will be upon …

The redshirt freshman is the brightest spot in an otherwise dreary season for the Cyclones. Passed over by Big 12 schools in his backyard, Warren, of Lawton, Okla., is second in the conference to Baylor’s Shock Linwood with 113.9 rushing yards per game. He has notched 100 yards the past three games, and against Texas Tech, he exploded for 245 yards on just 23 carries (10.6 ypc). On three occasions, an opposing rusher has gone for 100 yards against UT, including K-State’s Charles Jones last week.

If on a better team, Pierson would be a candidate for defensive player of the year in the Big 12. His 6.5 sacks are second to OSU’s Emmanuel Ogbah’s eight, and his 10 tackles for loss are just 1.5 behind Ogbah. Pierson, who came to ISU from a California junior college two years ago, was a non-factor in last year’s 48-45 loss to UT, registering one solo tackle.

Lanning‘s promotion to starter was expected after he replaced Sam Richardson last week and tossed three touchdown passes in the second half to make the loss to Baylor respectable, 45-27. The redshirt sophomore’s debut as starter coincides with the installation of Todd Sturdy as play-caller. Sturdy replaces Mark Mangino, who was said to have philosophical differences with head coach Paul Rhoads. If Lanning falters, it wouldn’t be a shock to see the return of Richardson, who threw for three touchdowns and 345 yards in last year’s loss in Austin.