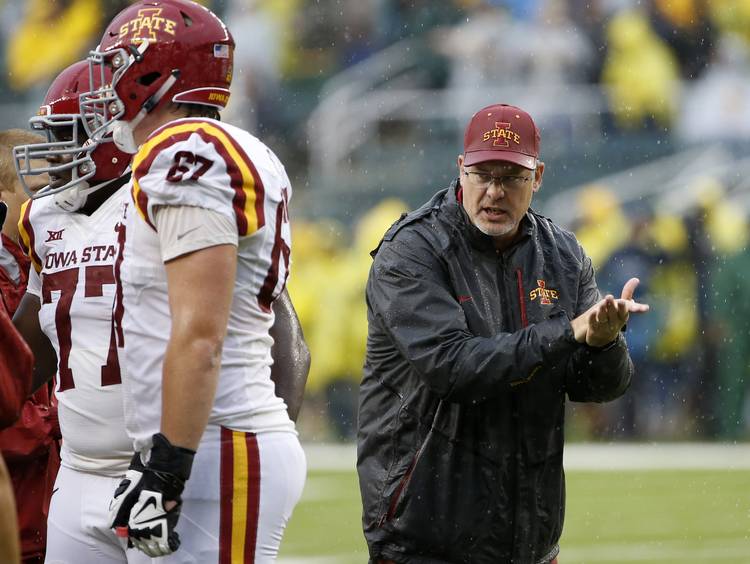 Iowa State coach Paul Rhoads is fighting to keep his job after the Cyclones started the year 2-5. (Photo by Ron Jenkins/Getty Images)

This feels like a double whammy of bad karma. Either that, or sinking 2-5 Iowa State needs all the mojo it can muster Saturday against rising 3-4 Texas.

“It’s homecoming, and it’s on Halloween,” UT defensive coordinator Vance Bedford said. “They’re trying to tell us right now that we’re a patsy. That’s how I look at it.”

Halloween night smack dab in Central Iowa doesn’t sound like a recruit’s dream. But this will be a nightmare scenario for the Longhorns if they don’t care of business against the dysfunctional Cyclones.

For the first time this season, Texas actually faces a team that’s going through similar, if not more, drama that it did at one point. And that’s saying something, because few programs create Oscar-worthy drama like the Longhorns.

Iowa State coach Paul Rhoads fired offensive coordinator Mark Mangino last Monday when the two couldn’t get on the same page. Rhoads had different ideas for the offense, but “Mark was not interested in that,” he said. So the one-time Kansas coach is out, and passing game coordinator Todd Sturdy takes over Iowa State’s play-calling duties.

Texas coach Charlie Strong changed play-callers after the season-opening loss to Notre Dame. The Horns changed quarterbacks, too. The Cyclones will do the same thing. Sophomore Joel Lanning will start instead of senior Sam Richardson.

“I feel like I prepare every single day for all the responsibility that can be given to me,” UT play-caller Jay Novell said. “For me, I was prepared. So I don’t know what’s going on up there.”

Texas got its engine running against Oklahoma and revving against Kansas State. Winning cures everything, or so many believe, and the Horns spent the week talking about how close this team has become.

To hear the seniors tell it, the upperclassmen have finally embraced the young, brash freshmen. And why shouldn’t they? Several freshmen, including offensive linemen Connor Williams and Patrick Vahe along with defensive backs Holton Hill and Davante Davis, back it up with solid play on the field.

“That’s what I tell our older guys all the time,” Strong said. “If y’all want to win, you have to bring these guys in, make sure this becomes a team. That’s what has started to happen now.”

Go inside the locker room of any sport on any level, from the pros down to high school. Players respect talent. This was the main problem last year. Upperclassmen didn’t respect the younger players. That stunted the team’s growth process, and seniors like Quandre Diggs repeatedly mocked those who “didn’t love football.”

This current freshman class ruffled feathers on social media last summer before practice even began. New co-workers were boasting about their accomplishments before learning where the bathroom is. To say the veterans were unimpressed would be an understatement.

Senior receiver Marcus Johnson joked how every freshman class thinks it will arrive, change the world and “be the university’s savior.” Johnson said his class thought the same thing.

Strong mentioned how some of his freshmen don’t talk much anymore.

“Awww, that’s a bunch of malarkey,” senior linebacker Peter Jinkens said. “I’ve been around Quandre Diggs for the majority of my career, and that guy just talks all the time. So I was used to it. But when they come in talking and they haven’t done nothing yet, OK, you’re just talking. But seeing them produce on the field, I’ll let y’all talk.”

What’s convinced the seniors is they believe the coaches are playing the best players. There does not appear to be any favoritism, several seniors said.

“Everyone knows their role, and everyone is fighting for a job, and that’s exactly how you want it to be,” center Taylor Doyle said.

This group can draw tighter by getting back to .500 before heading into November. Texas isn’t going to change what’s working. Expect heavy doses of running backs Johnathan Gray and Chris Warren with a dash of D’Onta Foreman, depending on how his injured foot feels.

Foreman suffered a minor toe injury against Kansas State, but coaches have indicated he’ll be fine. Bedford said his unit is feeling better, too. Defensive ends Shiro Davis and Naashon Hughes and linebacker Malik Jefferson have all battled minor things but should be at full strength.

The Cyclones should have juice after believing they got a raw deal two years ago on a critical replay review of a goal-line fumble. Then, they believe another one slipped away last year when Texas rallied to get a game-winning field goal before time expired.

But Texas is 11-1 in the all-time series and, frankly, these are games Texas usually wins.

So, Vance, what will you be on Halloween?

Bedford said: “Hopefully, I can dress up as a coach!”