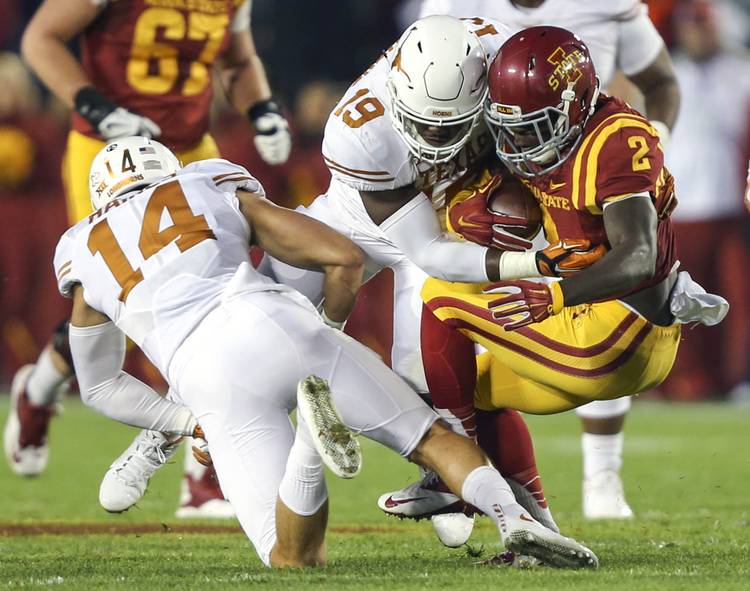 On Saturday morning, we asked four questions about the Texas-Iowa State matchup.

DID JERROD HEARD THROW FOR 100 YARDS?

WHICH FRESHMAN RB NAMED WARREN HAD A BIGGER NIGHT?

Mike Warren. Iowa State’s talented freshman topped 100 yards for the fifth time — 32 carries for 157 yards and a touchdown. He’s the Big 12’s second-leading rusher and now is only 51 yards away from 1,000 for the season. It was thought that Texas’ Chris Warren III might see more opportunities with D’Onta Foreman nursing an injury, but he ended up with only two carries for 10 yards.

Yes. It’s just that Lanning — making his first start — did a good job of getting out of trouble. His third-and-long scrambles for first downs were back-breakers for Texas. We thought Longhorns defensive coordinator Vance Bedford would dial up the blitzes. And he did. Zone blitzes, run blitzes. Texas finished with six sacks — two from Peter Jinkens, one each from Naashon Hughes, Paul Boyette Jr., Bryce Cottrell and Hassan Ridgeway. That makes 17 sacks over the last three games.

DID TEXAS CONTINUE TO PROTECT THE BALL?

No. The Longhorns turned the ball over for the first time since the TCU game when Heard threw an ill-advised pass that was picked off. It was the sixth turnover of the season for Texas; heading into the game, Texas’ plus-seven turnover margin ranked 12th nationally while the Cyclones’ minus-seven margin had them at 112th nationally. Texas didn’t force any Saturday night.