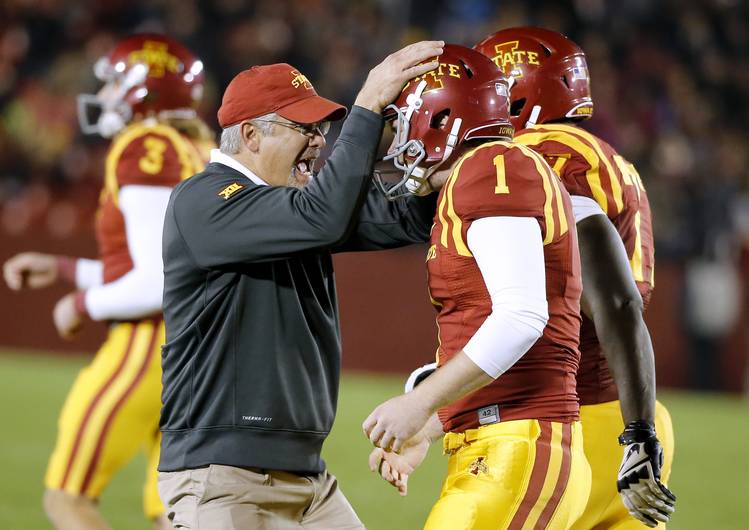 Iowa State coach Paul Rhoads celebrates with kicker Cole Netten after he kicked a field goal in the first half of play against the Texas Longhorns at Jack Trice Stadium on October 31, 2015 in Ames, Iowa. (Photo by David Purdy/Getty Images)

AMES, Iowa — Texas insiders, from those inside The Tower to members of the UT System Board of Regents and major boosters, truly want Charlie Strong to succeed. They need football to be successful for the long-term health of UT athletics.

He’s well liked within the athletic department. Administrators like his level-headed approach. Parents embrace his five core values. Players act like they’d run through a brick wall if he asked.

But the second-year coach is ultimately responsible for the wins and losses. He must hold up his end of the bargain, too.

Strong’s Longhorns looked flat and uninspired in a 24-0 shutout loss against Iowa State. It was a complete departure from how the team played in two previous wins. Several players leaned on their go-to excuse of “We just didn’t execute.” But now, Texas is 3-5 and a losing season is a real possibility.

“Coming off the performances like we had the last two games, we know we’re a better team than we played today,” guard Sed Flowers said. “I don’t know if we took that for granted.”

Even Strong himself seemed confused.

“You look at two losses at TCU and look at Miami, then you come here and just felt like, ‘Let’s get it together guys and play hard’,” Strong said during his post-game news conference.

Miami? Was that a Freudian slip or is Strong truly thinking about the Miami job? He denied any interest in that opening last week. He even laughed at the question.

In many respects, what happens this week against Kansas is immaterial. The Jayhawks are 0-8. If the Longhorns can’t win this one at home, then Strong’s job status will be in real jeopardy.

Strong is 9-12 so far at UT. Eight of those 12 losses have come by 21 points or more, a sign of how mentally fragile this program really is. What’s more troubling is how Strong’s teams seemingly take one or two steps forward and an equal amount of steps back.

Last season, the Horns battled to reach bowl eligibility. Then, Texas got blown out by TCU and Arkansas by a combined score of 79-17.

This season, Strong was forced to demote his friend and play-caller Shawn Watson after a 35-point blowout loss at Notre Dame. But turning the offense over to Jay Norvell hasn’t been a cure-all. Texas beat Rice and then lost three straight.

The win over 10th-ranked Oklahoma now looks like UT simply played above its head or caught the Sooners napping. The win over Kansas State was solid, but the Wildcats have lost four straight.

Interim athletic director Mike Perrin supports Strong at every turn. Perrin celebrated with Strong after the OU win, and he was there Saturday night during the post-game press conference in Ames. When ADs are around, coaches usually interpret that as a positive show of support.

So what’s happening? How could this team look so unprepared against the Cyclones? Even the opposing coach couldn’t believe his eyes.

“I don’t know how this comes across, but I’ll say it anyway,” Paul Rhoads said. “We shouldn’t beat Texas, probably. … Every kid that they recruit — if I go recruit them, I’m not going to get them, but we (beat Texas). And we have twice.”

Rhoads is referring to Iowa State’s win over UT in 2010. That loss was the lowlight of a 5-7 season under former coach Mack Brown. Saturday’s loss may be a similar moment.

“I thought guys were focused,” UT running back Johnathan Gray said. “We just went out there on the field and laid an egg.”

Defensive end Bryce Cottrell said, “Of course, I’m surprised. This is the University of Texas. It’s unacceptable. But Iowa State did a great job executing.”

Strong may be forced to reevaluate his entire offensive approach this offseason. The passing game simply isn’t working. The Horns have thrown for less than 100 yards three consecutive games. Quarterbacks Jerrod Heard and Tyrone Swoopes completed 12 of 22 passes for 85 yards combined against the Cyclones.

When asked if the problems were the play-calling or the quarterbacks, Strong said, “It’s across the board.”

The reality is the coaches and players have few answers. And there are a ton of questions. The next four games may be pivotal to Strong’s future — and Texas’ future, too.

For a larger look at the final game stats, click here.

Texas gives another lame road showing in blowout at ISU