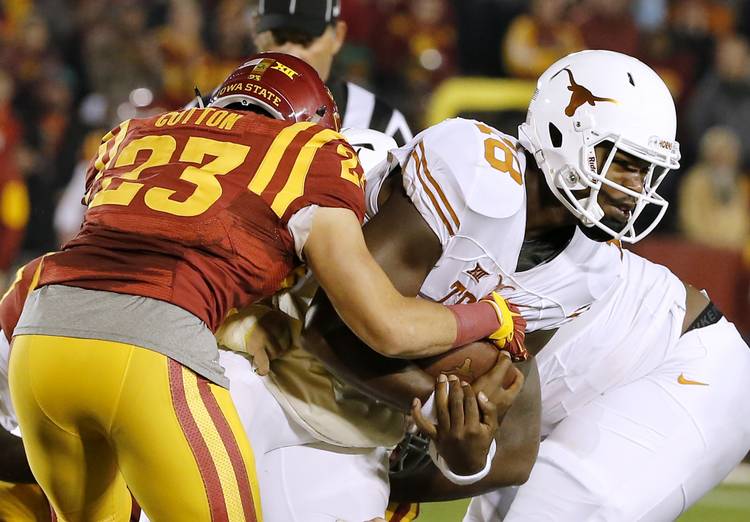 Iowa State's Darian Cotton tackles Texas quarterback Tyrone Swoopes as he scrambled for yards in the first half of play at Jack Trice Stadium on October 31, 2015 in Ames, Iowa. (Photo by David Purdy/Getty Images)

For a coach with a sputtering offense, watching Iowa State take an early 10-point lead en route to a 24-0 win had to be a stomach-churning endeavor.

“When you look at it, it’s not only at the quarterback position. It’s across the board,” Strong said when asked what’s going wrong offensively.

Last week, UT play-caller Jay Norvell brushed off questions about the anemic passing attack. The Longhorns hadn’t thrown for more than 100 yards in their two previous games. Against the Cyclones, both Jerrod Heard and Tyrone Swoopes combined for 85 passing yards.

Was there anything different about Heard? “He seemed like his regular self,” guard Sedrick Flowers said. “Regular Jerrod trying to get guys lined up. But he couldn’t complete passes.”

Heard seemed like his normal self afterward, too. He wouldn’t entertain questions on whether play-calling was the issue. “Far as play-calling, I think it’s going good. It’s just up to us to execute,” Heard said.

Later, Heard admitted it was humbling to get replaced during the game. Still, Heard acts like he wants to remain the starter.

There’s nothing wrong with establishing a run-oriented offense, as Strong wants to do. But when teams pack nine men around the line of scrimmage, the Horns must be able to throw well enough to keep defenders honest.

“You have your shots, but you’ve got to stand in there and take ‘em and let the ball go,” Strong said. “We had our opportunities, and we didn’t make the throw when it was there.”

At it stands right now, the only “passes” that are working are the under-handed flips to Daje Johnson, who races around the ends. Those are really just runs, but are statistically recorded as passes.

Johnson had six catches for 37 yards against the Cyclones. Tight end Andrew Beck had the biggest catch of the game, a 22-yarder in the fourth quarter. The longest attempted pass of the night went to Johnson, who had his toes out of bounds. The catch was ruled incomplete.

“No, I’m not confused at all,” Norvell said. “When you compete in this conference or in any conference, it’s a fine line. You have to really come to a game competitive, be ready to work and fight and claw. We’ve done that the last couple of weeks. We didn’t really do that tonight at all.”

Notebook: Is it time to make — another — QB change for Texas?

Texas gives another lame road showing in blowout at ISU