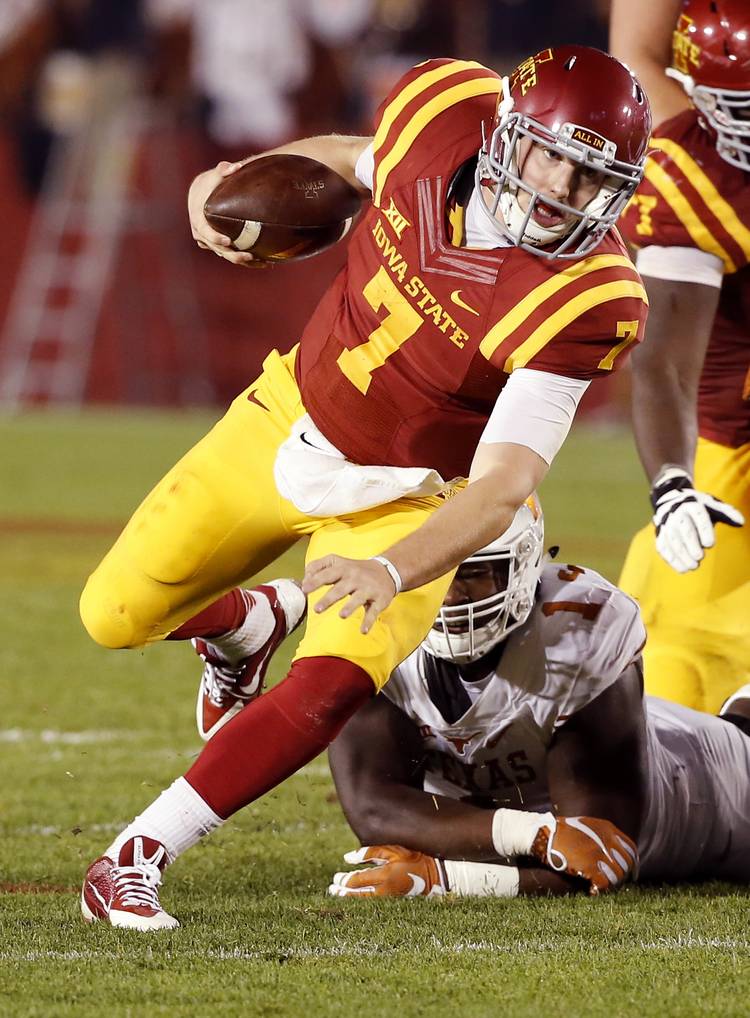 Iowa State quarterback Joel Lanning breaks away from defensive end Shiro Davis as he scrambled for yards in the first half of play at Jack Trice Stadium on October 31, 2015 in Ames, Iowa. (Photo by David Purdy/Getty Images)

AMES, Iowa — Yes, Texas was impressive against Oklahoma, but in the context of road games, Charlie Strong doesn’t lump in that one with the others.

“That one doesn’t count,” the Texas coach said last week about the neutral-site win last month in Dallas.

Here’s what does count: 112-10. As in Texas has been outscored by more than 100 points the three times it has visited another team’s stadium.

Notre Dame and TCU were top-10 opponents, so lopsided scores of 38-3 and 50-7 were understandable, if not forgivable.

Losing 24-0 at Iowa State was neither understandable nor forgivable, but it happened Saturday, and Strong is now left to decide how to avoid laying further road eggs with a bowl game slipping away.

Strong opened his press conference at Jack Trice Stadium lamenting road woes, and he pointed a finger at his coaches.

“We have to be a better prepared team and a better focused team when we come on the road,” Strong said. “Our coaches, we’ve got to get our players going. What they have to understand is the leadership has to take over. We don’t have enough seniors that are leaders, so it’s our job to get to make it happen.”

There’s no away around it: To make a bowl, Texas (3-5, 2-3 Big 12) must win its two remaining home games against Kansas (Nov. 7) and Texas Tech (Thanksgiving) and win at either West Virginia (Nov. 14) or Baylor (Dec. 5). At this point, beating Baylor is fantasy considering the unbeaten Bears could enter the regular season finale eyeing a Big 12 title and perhaps a playoff berth.

“I don’t think it has to do with road games,” center Taylor Doyle said. “I think we didn’t come out ready to play tonight and it showed.”

Strong is a believer that for a team to win on the road, it must play well defensively. “Pack your D,” he likes to say. That hasn’t happened this year, though Saturday may not be the best example, as that side of the ball had its moments. Peter Jinkens recorded two sacks, and four other Longhorns — Naashon Hughes, Paul Boyette, Jr., Bryce Cottrell and Hassan Ridgeway — had one apiece. Safety Jason Hall broke up a pass in the end zone, forcing a field goal to close the first half. Freshman cornerback Davante Davis made a nifty open field tackle or two.

Boiled down, the defense was on the field too long — 37 minutes — because of third downs. Iowa State converted 15 of 24 third downs, including three long runs by quarterback Joel Lanning in the first half. Texas countered softly, succeeding on 2 of 13 third downs.

The road woes must now be addressed, but no one seems to agree on the fix. Strong talked about the need to develop more senior leadership. Haines said he believes the leadership is sufficient.

Or, like Doyle said, maybe the venue is irrelevant and the team simply needs to perform better no matter where they are.

At 3-5, Texas now may be looking at another losing season