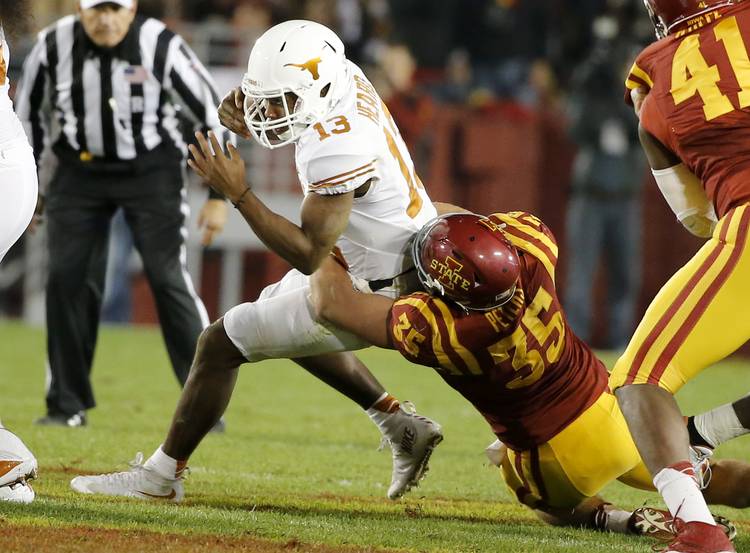 Texas coach Charlie Strong made it clear Monday that he expects more from quarterback Jerrod Heard.

Actually, he let it slip Saturday night that Heard needs to show patience in the pocket. The receivers were open, Strong believed. “Just release the ball,” he said after the 24-0 loss to Iowa State.

Two days later, Strong said he’s sticking with Heard as the starter this week against 0-8 Kansas. But the head coach left no doubt, in his own way, that the redshirt freshman needs to stand tall and throw with confidence.

“I’m fine with Jerrod,” Strong said. “We’ve seen him make plays. We know he’s capable of making plays. We’ve just got to continue to make those plays, and he’s got to be consistent and execute it.”

Strong said Heard approached him after the game and apologized for a poor performance. Heard completed 6 of 9 passes for 26 yards and threw an interception after rolling out of the pocket. A veteran probably would’ve probably thrown that ball away or run out of bounds.

“He just had an off-game. We all have ‘em,” linebacker Malik Jefferson said. “You can’t really point fingers at anybody.”

Backup quarterback Tyrone Swoopes subbed in for Heard the last two games. And Swoopes is doing more than just running his short-yardage “18 Wheeler” package. He completed 6 of 13 passes for 59 yards against the Cyclones.

Heard hasn’t thrown for more than 100 yards in four consecutive games, averaging 56.5 passing yards during a stretch where Texas has gone 2-2. “He’s still trying to get his wings,” tight end Caleb Bluiett said.

Heard’s incredible show against California seems like “years ago instead of a few games ago,” Strong said. In Week 3, Heard piled up a school-record 527 total yards in what may be one of the best performances of his collegiate career when it’s all said and done.

Heard’s October passing totals are the result of multiple issues. The Longhorns found success with a run-oriented scheme that sometimes relied on two running backs. Considering Strong has a conservative nature, UT play-caller Jay Norvell relied on the ground game until it proved untenable.

Strong dismissed questions about Norvell’s play-calling and whether he should try someone new, like tight ends coach Jeff Traylor. The offensive strategy is sound, the head coach believes. The quarterback needs to play better.

The Longhorns start the week as 30-point favorites against the Jayhawks. This team hasn’t even scored 30 points in its five previous games. Should Texas lose to Kansas? “We shouldn’t,” Jefferson said. Many fans thought the same thing prior to Iowa State, too.

Strong said he wasn’t embarrassed by Saturday’s outcome, which was the first UT loss in Ames in school history.

“He said it wasn’t?,” defensive tackle Hassan Ridgeway said. “I don’t feel good. We lost. You never feel good after a loss — period.”

Everybody inside the football building is now trying to figure out how Texas could play so well against Oklahoma and so poorly on Saturday. Linebacker Peter Jinkens said the team may have played “scared” against OU.

“Our season was already going bad and we just didn’t want to continue to go bad,” Jinkens said. “So everybody stepped up and played to their fullest ability.”

Asked if he was scared now that UT is 3-5, Jinkens said, “After this loss, yeah. We have to make a statement for the rest of this season if we want to turn this thing around.”