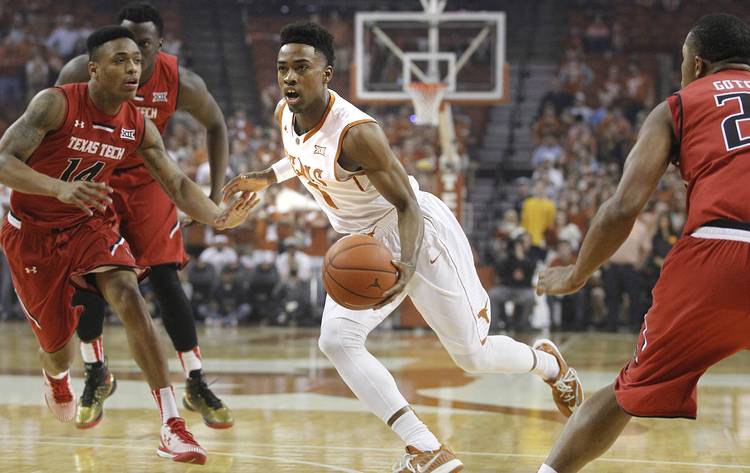 Isaiah Taylor simply couldn’t win. Strangers and new-found “friends” told him to leave Texas and jump into the NBA draft last spring. So did his father. Others encouraged him to stay, including his mother.

OK, so he’ll go, he decided. Leave the Longhorns after two respectable seasons, but having attained nothing tangible. No championships or real NCAA Tournament glory.

“Isaiah wanted to leave,” said Loretta Perkins, Isaiah’s mother, “but I think he wasn’t too sure if it was the best thing for him.”

Well, maybe he should stay. Taylor shot 28.2 percent from 3-point range last season and struggled after missing 10 games with a broken wrist. OK, so he’s staying after all. It’s decided.

One day after the deadline to declare for the draft, Perkins received a puzzling text.

“It said, ‘Mom, I think I made a real big mistake’,” Perkins said. “He never said who or what it was that made him feel the way he did.”

Mothers always know when things aren’t right. The 6-foot, 1-inch guard essentially put his faith in new coach Shaka Smart, as did UT administrators, other Longhorns and the rest of the fan base. Taylor insists he isn’t looking back now. China, the Bahamas, No. 1 North Carolina and the rugged Big 12 schedule awaits.

“When I made the decision to come back to school, it was all-in or nothing,” Taylor said. “I wasn’t going to put in half-effort and just think about the NBA.”

Taylor never told his mother why he ultimately decided to stay. But she has a hunch. Former coach Rick Barnes is gone. He was notorious for chewing on his point guards, and Taylor had reached his breaking point, even ignoring Barnes in games last February.

When Smart took the UT job, he knew the task at hand. Smart and his assistants hung signs in the basketball offices. The message was simple yet subliminal: “Get Isaiah The Ball.” If Smart is going to get his program off the ground, he’ll need a sizzling point guard, Taylor was told. It must’ve worked.

“The people that are helping guide my decision told me I’m going to have to choose what path I want to go,” Taylor said. “I trust Shaka enough and this coaching staff enough that they will put us in the right position to succeed.”

You should see Taylor smile when he talks about Shaka — not “Coach” or “Coach Smart.” He was all-in this summer when the Horns went through intense workouts with new strength coach Daniel Roose. Taylor, who came to Austin as a string bean with dreads, now looks like a chiseled 184-pounder with serious purpose.

Taylor wants to be Smart’s on-court quarterback. The junior could end up playing shooting guard to get freshman Kerwin Roach on the floor. But Taylor will have the ball in his hands a lot, as he should. “He’ll start there,” Smart said, “unless something crazy happens.”

Most coaches would shy away from point guards unable or unwilling to shoot 3-pointers. Taylor took 39 shots beyond the arc last season, and that was only after being prodded by Barnes. He shot 19 3-pointers as a freshman who averaged 30 minutes a game and played all season long. He just wouldn’t pull the trigger, the direct opposite of Javan Felix, a 3-point machine gun.

Taylor’s best skill is driving inside and forcing action. Whether that means driving for the layup, dunk or dishing to the big men, Taylor finds contact and gets to the free throw line. He shot 84.2 percent there last season.

Smart said he wants to see more nastiness from his new players. Taylor has that. Go back to Madison Square Garden last season against Iowa. Taylor tried to throw down a monstrous, message-delivering dunk in the waning moments of a 14-point win. He landed awkwardly and broke his wrist. But had that dunk gone down, oh, baby.

“As the point guard, he has to have that mindset,” senior Demarcus Holland said. “We all need to work on being leaders. if we have a group of leaders, we can go further than just depending on one person to lead.”

By staying, Taylor also gets to play with his high school friend, Shaq Cleare, who went to The Village School in Houston. Cleare, a 6-foot, 8-inch forward, initially went to Maryland but transferred to Texas prior to last season.

Taylor is a big reason why Cleare is even here. He thinks of Taylor as his little brother. “If he gets out of hand, y’all can come to me,” Cleare said.

Cleare said he was ready to say goodbye to Taylor. But he’s sure glad he stayed. “Any which way the situation went, I would’ve been happy for him,” he said. “I think if he left, he would’ve been fine. If he stayed, great for me. I get the ball some more. So I’m not really complaining.”

Neither is Smart nor the Longhorns.