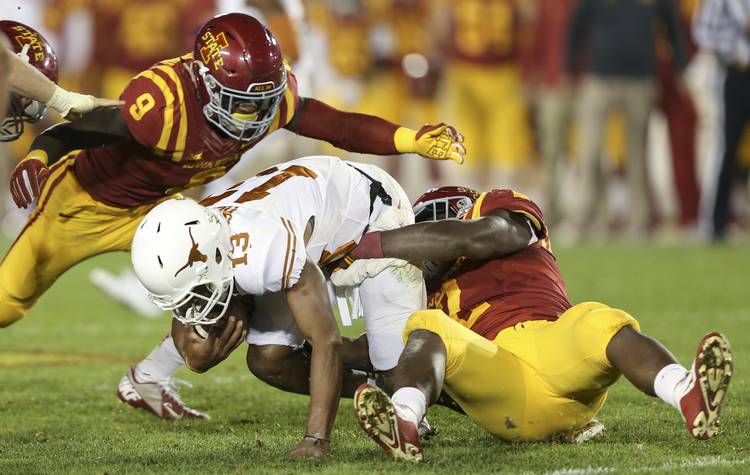 Jay Norvell acknowledges shortcomings in Texas’ passing game, but maybe not for the same reasons others have pointed to.

At Tuesday’s weekly press conference with the play-caller, it was suggested to Norvell that the offense didn’t take shots down the field at Iowa State.

“I don’t agree with that statement,” Norvell said. “We did throw the ball downfield. We didn’t execute well enough.”

He was asked for the number of times he called a downfield pass.

“We got sacked a few times; (Jerrod Heard) scrambled a few times when he didn’t throw,” Norvell said. “You can watch the film and count.”

Regardless, it’s not working. In a 24-0 loss to the Cyclones, Heard failed to reach 100 yards passing in the fourth straight game, forsaking his greatest asset in the passing game — the deep ball — for scrambles and short throws. He wound up with 26 yards passing and an interception, and he was benched in the fourth quarter.

Texas is No. 122 in passing. Three of the six teams ranked behind the Longhorns are ground-oriented academy schools.

Tough watching: Heard reviewed film of his seventh start, and … “I did not like what I saw,” he said.

Heard, who appeared to have solved Texas’ quarterback woes with solid play against Rice and Cal in September, said fans jumping off his bandwagon remind him of when he was in high school at Denton Guyer.

“When we won, everyone was giving me high-fives,” Heard said. “I got free lunches from my neighbors. When we lost, everyone was taking my lunch.”

New guys: Norvell continues to stress the importance of giving increased playing time to freshmen. Though he didn’t name names, that could mean good things for running backs Chris Warren and Kirk Johnson and receivers Ryan Newsome and DeAndre McNeal.

“It’s really important these young guys get an opportunity to play,” Norvell said.

From China, the Bahamas and Big 12, Longhorns going everywhere