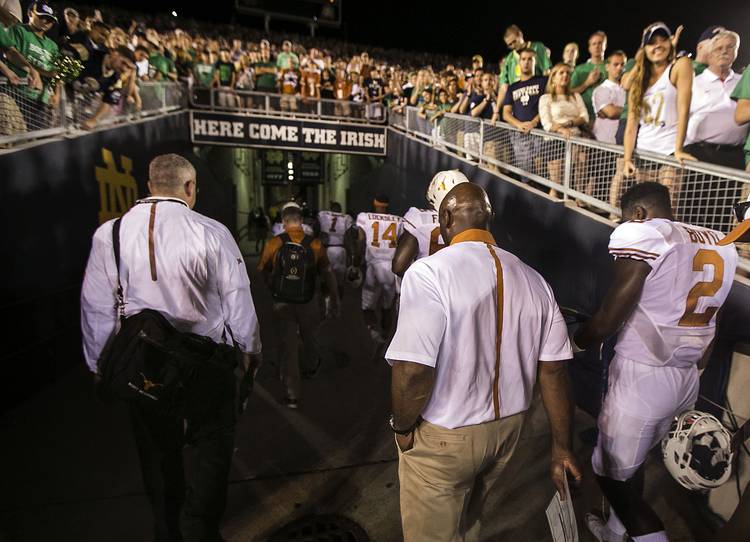 When the going gets tough, Texas’ football team gets going — down, sideways, backward.

Any direction but forging straight ahead.

Last Saturday’s perplexing 24-0 loss at Iowa State — don’t call it embarrassing, though — was another indictment on the team’s fortitude when things turn badly.

On Monday, Strong agreed that adversity seems to bring out the worst in his team.

“The main thing is for them not to lose their confidence and not lose their focus,” Strong said. “Just keep playing. It’s a 60-minute game.”

Asked why Texas has such a hard time weathering storms, Jefferson said, “I feel like people lose sight of the main goal.”

To many, the blanking at the hands of previously two-win Iowa State marks the nadir of the Strong era. Let’s rank the five ugliest losses:

Where it turned really bad: Not one, not two, but three Taysom Hill touchdowns blew it open in the third quarter. Who can forget Hill leaping over safety Dylan Haines at the goal line?

Where it turned bad: The Irish drove 95 yards to go up 14-0, sapping the spirit out of Texas fans who had showed up in droves for the opener.

Where it turned really bad: After a field goal drew Texas to within 17-3, Haines was tardy on deep help and ND receiver Will Fuller walked in for a 66-yard TD. The Irish scored on their next two drives as well.

Strong’s quote: “You look at the last three showings we’ve had and it’s been embarrassing.”

Where it turned bad: Probably the day the Texas Bowl announced this matchup. The Longhorns never seemed interested in prolonging their season, staggered by the weight of a long year. Conversely, Arkansas rode a wave of confidence into NRG Stadium after late-season shutouts over LSU and Ole Miss. The Longhorns had only 59 yards of total offense.

Where it turned really bad: Johnathan Gray fumbled with his back to the end zone, and Arkansas’ Taiwan Johnson recovered for a 17-0 lead.

Strong’s quote: “For that to happen is an embarrassment to the program and should never, ever happen within the program.”

Where it turned bad: Daje Johnson fumbled and suffered a concussion on UT’s first offensive play. A short while later, Kyle Ashby’s punt snap sailed out of the end zone for a safety and a 9-0 TCU lead.

Strong’s quote: “The day was awful. It was embarrassing.”

Where it turned bad: Warmups. “We were flat,” Jefferson said.

Where it turned really bad: The decline for once was gradual, as Texas punted nine times and tossed an interception before ever taking a snap in ISU territory.