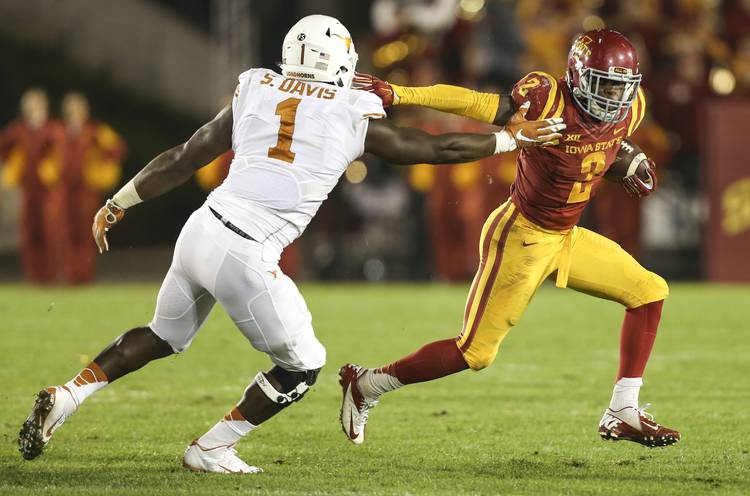 One day after Texas offensive coordinator Jay Norvell had a passionate meeting with reporters, Vance Bedford’s blood was pumping, too.

UT’s defensive coordinator, who wears his emotions on his sleeve, started off in normal tones Wednesday about his unit’s performance in a 24-0 loss against Iowa State.

But Bedford’s voice started rising when asked about the players’ attitude and whether they’ll be ready for winless Kansas, a team that hasn’t won a road game since 2009.

“I don’t care who walks into that game Saturday night, these guys will be ready to roll,” Bedford said. “I flat got after these guys this week about attitude and (asking) who do they think we are.

Iowa State quarterback Joel Lanning made his first career start, and Bedford said the Horns “made him look like Cam Newton.” The Horns also got blasted by freshman running back Mike Warren, who ran for 157 yards.

Asked if he was angry, Bedford said, “I’m always angry. I say thank you Lord, you let me get up one more day to go yell at these players.”

According to a document released by UT, Patterson is owed $1.478 million for the 2015-16 school year. He is also scheduled to receive $1.515 million for the 2016-17 academic cycle. If Patterson lands another job during that time, UT will deduct whatever he made from its required total.

Also in the agreement, Patterson agreed to a stipulation that he cannot sue the university. Both sides also agree that neither party will make disparaging comments about the other.

Tough watching: Heard reviewed film of his seventh start, and … “I did not like what I saw,” he said.

Heard, who appeared to have solved Texas’ quarterback woes with solid play against Rice and Cal in September, said fans jumping off his bandwagon remind him of when he was in high school at Denton Guyer.

“When we won, everyone was giving me high-fives,” Heard said. “I got free lunches from my neighbors. When we lost, everyone was taking my lunch.”

Bedford’s comments echo those made by Norvell, who advocated more playing time for freshmen. That could mean good things for running backs Chris Warren and Kirk Johnson and receivers Ryan Newsome and DeAndre McNeal.

“It’s really important these young guys get an opportunity to play,” Norvell said.

From China, the Bahamas and Big 12, Longhorns going everywhere