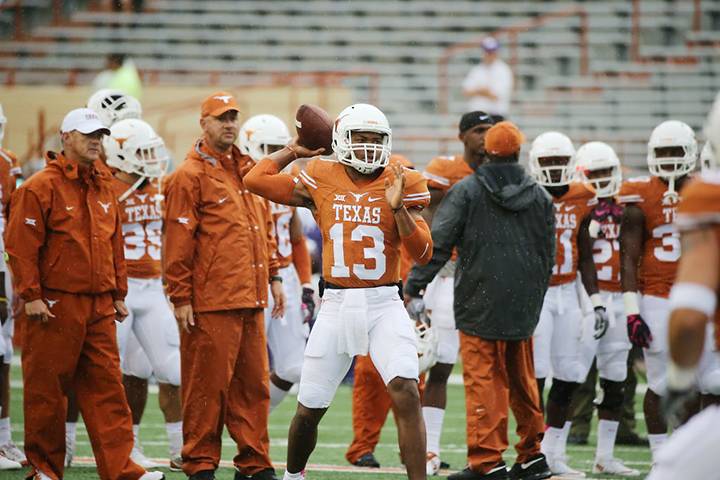 Texas QB Jerrod Heard and the team brave the rain in warmups before the start of the UT game against Kansas State Saturday October 24,2015. credit: Deborah Cannon/Austin American-Statesman

BRIAN DAVIS: A UT win would be a quick fix

First things first: Texas President Gregory L. Fenves said he thinks Charlie Strong is “doing a great job” despite the team’s 3-5 record. Now, this could fall in the same plausible realm of what Strong said Monday about the Iowa State loss (“I don’t think that was embarrassing.”) Come again? Look, nobody on campus is happy with the program’s record, which should improve Saturday against 0-8 Kansas. Administrators, coaches and fans want to see a passionate effort against the Jayhawks. Beating that hapless bunch won’t solve all the world’s problems, but it’ll make folks feel good again.

KIRK BOHLS: This is a can’t-win Saturday

We will see if the Iowa State loss left any scar tissue. I’m looking for a lot of pointed anger out of the Texas football team. If it doesn’t show itself on Saturday, there may not be any hope. In some ways, this is a can’t-win game for Charlie Strong, whose team is a prohibitive favorite to beat winless Kansas. But in others, it’s a must-win contest for Strong’s future. I expect to see a lot of passing out of Texas.

We were duped by the Oklahoma win. Thought the Longhorns were beyond this blowout madness. Then they go and get skunked in Ames. As a result, Texas’ poor play will probably spoil the postseason plans of other teams in the conference, namely the one just north of the Red River. Wouldn’t you hate to be an OU backer who had to explain to the CFP committee why the one-loss Sooners deserve inclusion in the top four? Imagine the answer: “So you’re talking about the same Sooners who lost to the Texas team that got shut out by Iowa State? I think you’re in the wrong room. The Cotton Bowl room is down the hall.”

RYAN AUTULLO: Book it — KU will win a game

Kansas is going to win a game. Book it. At some point between now and the end of the month, the 0-8 Jayhawks will grow tired of losing, get angry and notch an upset win for first-year coach David Beaty. It won’t happen next week at TCU, but KU’s other three opponents — Texas, West Virginia and Kansas State — should be on alert. Ahh, who am I fooling? The Longhorns roll in this one.