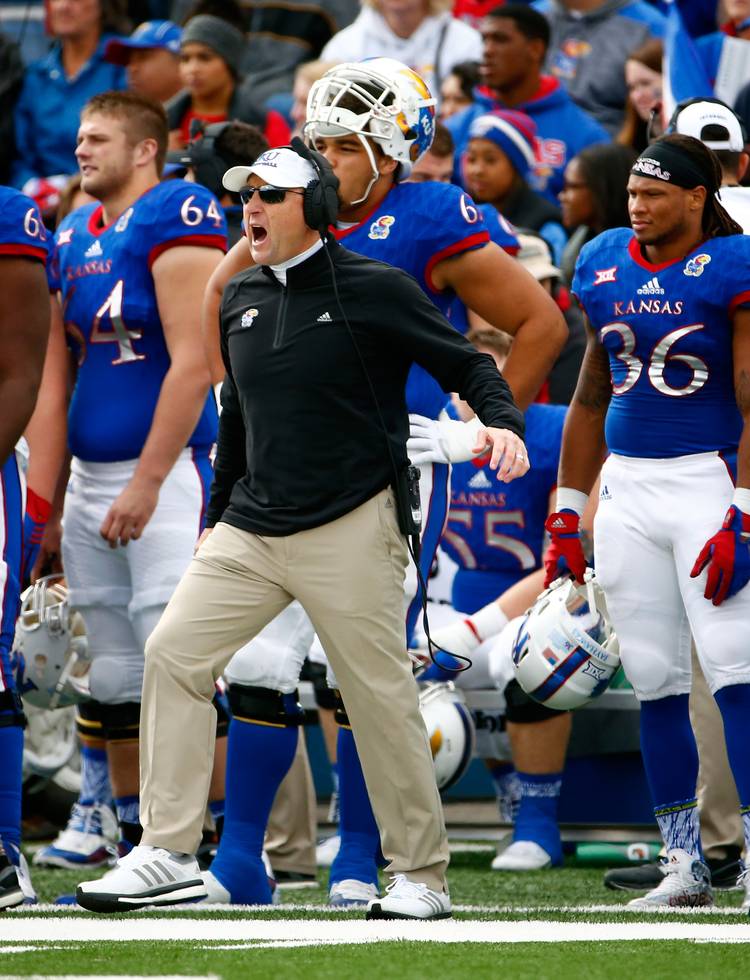 LAWRENCE, KS - OCTOBER 31: Head coach David Beaty of the Kansas Jayhawks reacts on the sidelines during the game against the Oklahoma Sooners at Memorial Stadium on October 31, 2015 in Lawrence, Kansas. (Photo by Jamie Squire/Getty Images)

Each week of the season, the American-Statesman will interview the beat writer of Texas’ opponent. This week, the Lawrence Journal-World’s Matt Tait — @mctait — offers insight on Saturday’s Texas-Kansas matchup:

How did it get to the point where Kansas is no longer competitive?

This is a complicated answer and dates back to before the failed Turner Gill and Charlie Weis eras. The biggest issue, however, is that KU, for a variety of reasons, has been on the path of turning over coaches way too often during the past six years. Counting Mark Mangino and current head coach David Beaty, as well as interim head coach Clint Bowen in 2014, KU has had five different guys calling the shots since the start of the 2009 season. That’s no way to build anything and it’s especially detrimental at a program like Kansas that has long lingered at the bottom of the Big 12 to begin with.

Is David Beaty the right guy to fix things?

Beaty has a lot of things going for him. For one, he’s been here before and he understands what it takes to both succeed and fail at Kansas. Two, he’s got incredible energy and enthusiasm for the job and maintains a positive demeanor at all times. That won’t win you games, but it can build confidence and be part of the recipe for rebuilding a program. He hired a good staff, he’s working as hard as he knows how to work and he believes he can get it done. If he can tap into his Texas connections from his days as a high school coach down there to upgrade the talent on the roster, he’s got a shot. But it’s going to take a few years before we really know how it’s going because the Jayhawks are operating more than 20 short of the 85 allowed scholarships.

What are some of the bright spots to come from this season?

For the first time in a long time, there’s talk that KU really might have found its QB of the future. True freshman Ryan Willis, who has started the past four games in place of injured starter Montell Cozart, has shown flashes of serious talent, and his ability to handle the big stage along with his big arm, confident personality and overall skill set make him an intriguing option. Along those same lines, several other true freshman or first-year players have received a ton of valuable experience that should serve them well in the future. Beyond that, it’s been pretty rough in most statistical categories, but the coaching staff and players have done a great job of focusing on the big picture and not allowing this season to beat them down. You’d never know from watching them at practices that this is a winless team.

Has Charlie Weis had anything to say since he was fired at Kansas? And is the school still paying him?

Not publicly, but judging by the couple of times I’ve talked to him since he was fired last fall, he seems to be enjoying himself. He’s back living in South Bend, Ind., where he and his wife built a wonderful facility for people with special needs like their daughter Hannah. And, yes, Weis is still being paid by Kansas and will be through the end of 2016.

Finish this sentence: Kansas will win Saturday if …

Texas plays like it did last week and Kansas plays a perfect game. That’s where the Jayhawks are at these days. Anything short of perfection is simply not going to be enough to even compete with most Big 12 teams. The Jayhawks just ran through a nasty four-game stretch of big-time offenses — Baylor, Texas Tech, Oklahoma State and Oklahoma — so it’s possible they’ll welcome what the Longhorns do and have a little more confidence matching up. But given that this one is on the road and the Longhorns are probably more than a little upset about last week, I can’t see KU hanging. I’ve got UT, 41-14.

Texas vs. Kansas: The Eyes of Texas will be upon whom?

Texas vs. Kansas: Matchups that matter