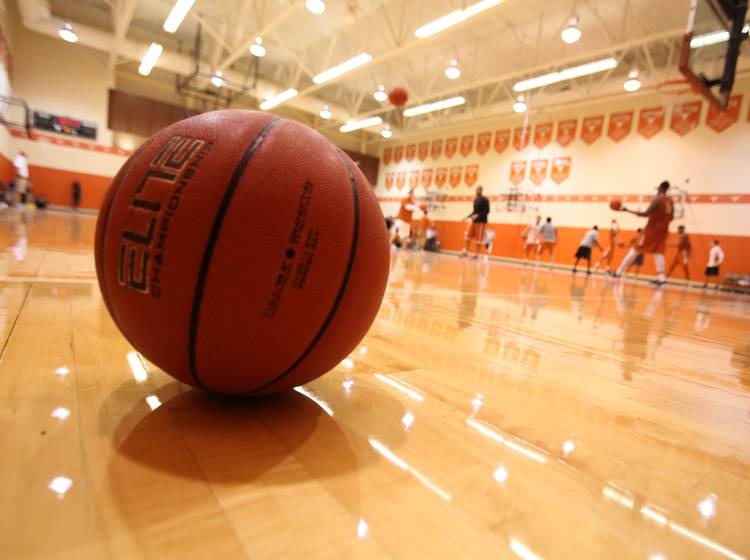 Texas checked off a lot of boxes Friday night in an 95-61 exhibition win over Tarleton State.

Coach Shaka Smart wanted to see lots of players get into the game. He substituted like a mad scientist with 10 players logging at least 15 minutes each.

How will big men Ridley and Prince Ibeh fit into Smart’s new system? Just fine, from the looks of things.

Ridley, playing with more confidence under this new coaching staff, had 15 points and 13 rebounds. Ibeh flashed a nifty baseline spin move for a layup and caught a ball in traffic that led to a dunk. He blocked two shots and, as usual, altered several more in 17 minutes.

Smart wanted to see nastiness. Junior Isaiah Taylor had the right idea when he got rejected on a dunk attempt. Freshman Kerwin Roach was more on target, hammering home a vicious one-hander and drawing a foul with 2:28 remaining in the first half.

Roach’s monster play was the highlight of his 16-point night. Fellow freshman Tevin Mack added 16 himself in a terrific debut where he went 4-for-9 from 3-point range. Not to be outdone, UT’s third freshman Eric Davis had 12 points in 21 minutes and went 4-for-4 from the free-throw line.

“Coach always has the mentality of us being aggressive,” Roach said, “so I just wanted to go out there and attack.”

It didn’t go unnoticed that all three freshmen subbed in before workhorse senior Javan Felix, who logged 15 minutes and finished with six points.

“I don’t think it’s anything specific about any one player,” Smart said. “It’s what those freshmen have earned. … They’ve been three of our better players the last five weeks.”

Fans wanted to see the up-tempo style that was promised when Smart arrived from Virginia Commonwealth. The Horns let 3-pointers fly numerous times with 25 seconds or more remaining in the shot clock.

Consider this: UT took a season-high 27 3-pointers last season in a December game against UT-Arlington. Against Tarleton State, Smart’s bunch went 12-for-30 from 3-point range.

Throughout the preseason, guards have talked about Smart’s insistence on having your feet ready at all times. Anticipate the basketball. Smart wants the players always thinking about being mentally ready, so it’s a catch-and-shoot fluid motion.

“You want high-quality shots, whether they’re 3s or 2s,” Smart said. “If they’re quality open looks, I’ll take 30 open 3s from the right guys any night. I would say there are probably four to six that were ill-advised or guys didn’t have their feet under them, weren’t ready to shoot. But I would say 25 of ’em were pretty good looks.”

Nobody got to take a look at Texas forward Connor Lammert (illness) and Shaq Cleare (root canal). That didn’t bother the hundreds of Tarleton State fans who made the trip from Stephenville. They whooped it up like it was the Final Four, not a preseason exhibition.

Overall, it was the perfect type of exhibition game — the visitors were competitive, the home team won and nobody got hurt.

The Longhorns will now pack their bags and head to Shanghai, China, for a week in the Far East.

Texas and Washington are scheduled to meet in the first regular-season intercollegiate men’s basketball game between U.S. teams in China. The game is scheduled to tip off 11 a.m. on Saturday, Nov. 14. But that will be 9 p.m. Central time on Friday, Nov. 13, back stateside.

Rough travel: Texas was scheduled to fly out of the Austin airport on Saturday morning and connect in Dallas on its way to Shanghai, China. However, team officials are so nervous about the waterlogged airport tower, the team will meet at 3:30 a.m. and bus to Dallas.

“I heard they got good McDonald’s over there,” Roach said. “I’ll probably stick with the Big Mac and the nuggets.”

Here's a look at Texas' first five regular-season games this season. All games will be radio broadcast on 104.9 The Horn.

Staff takes: The best way to get over Iowa State? Beat Kansas

Bests and Worsts from Texas-Kansas