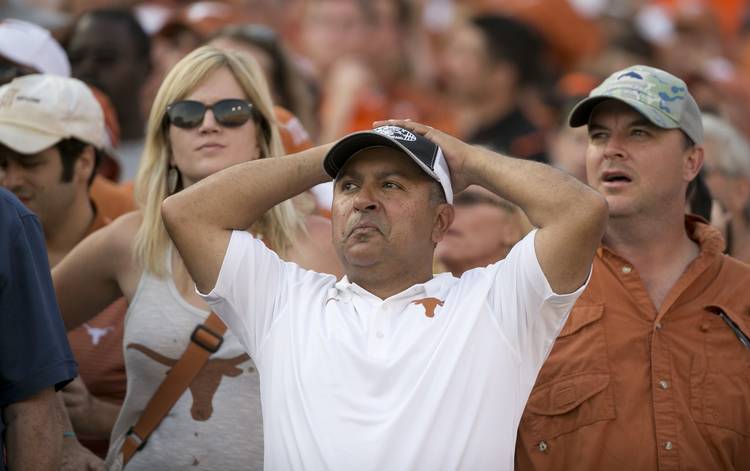 Texas football fans are just as frustrated as the players after last week's 24-0 loss at Iowa State.

It’s difficult to say which was worse for Longhorn football fans: last Saturday’s loss to Iowa State or coach Charlie Strong saying on Monday that “I don’t think that was embarrassing.”

Fans were up in arms about both this week.

“Well, I’m not up in arms,” said Texas President Gregory L. Fenves, who ultimately decides whether any football coach stays or goes.

Patience is a virtue, although we live in a society where that’s a thing of the past, too. Think about how Kansas fans must feel. The Jayhawks haven’t won a road game since 2009, and they enter Saturday’s game with an 0-8 record.

The Longhorns (3-5 overall, 2-3 in the Big 12) were peppered with questions about their schemes, attitudes, coaching staff and mental makeup in the wake of that 24-0 loss to the Cyclones, the first for a Texas football team in Ames.

At one point, linebacker Malik Jefferson said, “Just say I shook my head.”

Fellow linebacker Peter Jinkens said: “If I had the answers, I’d tell you. I just feel like the cycle keeps on continuing.”

Heard hasn’t thrown for 100 yards in four consecutive games. There is real worry the passing game needs a complete offseason overhaul. Strong most likely won’t change play-callers a second time this season. So it’s up to Jay Norvell, with help from Jeff Traylor, to figure things out.

Kansas is at or near the bottom of every major Big 12 statistical category. Texas is favored by about 30 points, although this team hasn’t scored 30 points since Sept. 19.

“You can’t change who you are when stuff like that happens,” Heard said. “Then you get into a pattern of lose, get mad, beat these teams, lose again, then get mad again, and it becomes a pattern.”

What really has the coaching staff agitated is how the Horns came out so emotionally flat against Iowa State. Now, coaches are paid handsomely to make sure the players are prepared, but the players must be accountable, too.

“When I was in college, I didn’t have anything except Saturday afternoons,” Norvell said. “That’s all I thought of all week. Our kids aren’t always like that. So we’ve got to remember that as coaches. Take advantage of that and keep pounding that message home.”

Defensive coordinator Vance Bedford joked that he’s always angry. “My personality, who I am, you can see it on me. I don’t hide anything,” Bedford said.

Bedford, who played at UT in the late 1970s, has a deep reservoir of Longhorn pride. This week, he told the players that nobody in the locker room should feel like they are Vince Young or Derrick Johnson. “It’s not acceptable to be where we are,” Bedford said.

Defensive tackle Hassan Ridgeway gets it. “Mentally, we know what we can do and what we should do. We’ve got to go out there and show it,” he said.

There’s no need to break down Xs and Os this week against the Jayhawks. Texas has enough talent. This is a question of mental wherewithal.

“I’m not going to sit here and point fingers, because like I said before, if I pointed a finger, I’ve got three of them pointed back at me,” fellow defensive lineman Tank Jackson said.

Fenves isn’t getting in Strong’s face. And the head coach feels as though he doesn’t need to get in some of his players’ faces.

Staff takes: The best way to get over Iowa State? Beat Kansas