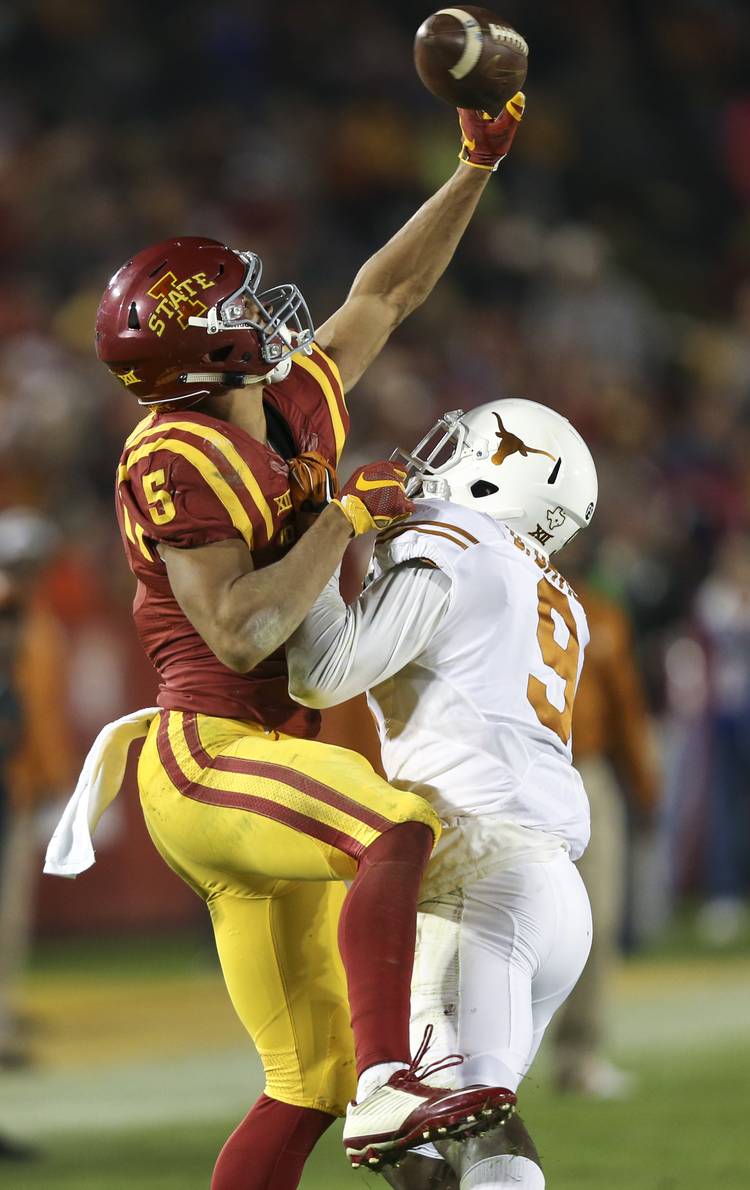 Iowa State wide receiver Allen Lazard, left, tries to catch a pass as he is held by Texas cornerback Davante Davis during the second half of an NCAA college football game, Saturday, Oct. 31, 2015, in Ames, Iowa. Davis was called for pass interference on the play. (AP Photo/Justin Hayworth)

THE FANS VS. THEIR OPTIONS

Sixth Street. Rainey Street. Staying home. Saturday nights in Austin offer many entertainment options, and to many, a battle of two poor teams does not qualify as entertainment. Still, Texas reported only 10,000 unsold tickets as of mid-week, which is a smaller number than has been given for most other games. But with Alabama and LSU on TV, and rain in the forecast, fans may vote with their feet, as interim athletic director Mike Perrin might say.

Someone has to get the edge. Will it be Heard, who is averaging a measly 105 yards? Or Kansas, which ranks second-to-last nationally against the pass. Heard, who endeared himself to teammates with his confidence, has been gun shy of late. Many of the few yards he’s wracked up are on edge passes and short dump-offs to Daje Johnson. Heard’s 26-yard clunker against Iowa State, which entered the day with the nation’s No. 114-ranked pass defense, was particularly alarming.

In some ways, it’ll be a battle of true freshmen. Needing to play catch-up, Willis has had to throw at least 30 times in all four of his starts. That may not be necessary on Saturday because, as defensive coordinator Vance Bedford said, “let’s be frank, we’re not scoring much.” Freshmen Holton Hill and Davante Davis are in line to start at cornerback for Texas, which hasn’t given up a 300-yard passing day since TCU.

For reasons that are unclear, Texas if favored by 28.5 points. Sound crazy? To start the week, the line was 31.5 points. Kansas (0-8) may go down as the worst team in Big 12 history, or at least be in the discussion with other Kansas teams as well as the sad-sack squads Bill Snyder rolled out early on at Kansas State. Still, Texas is deficient offensively and hasn’t scored 30 points in a game since September. Texas is 3-5 against the spread; KU is 2-6.

After the blowout loss at TCU, Vance Bedford flipped a switch and began sending constant pressure. The result has been 17 sacks in three games, including six at Iowa State. In that time, the line has accounted for 10.5 sacks and linebackers 5.5, including three by Peter Jinkens. Safety John Bonney has one. Kansas has surrendered 22 sacks, which isn’t terrible and is one fewer than Texas’ offense has given up.