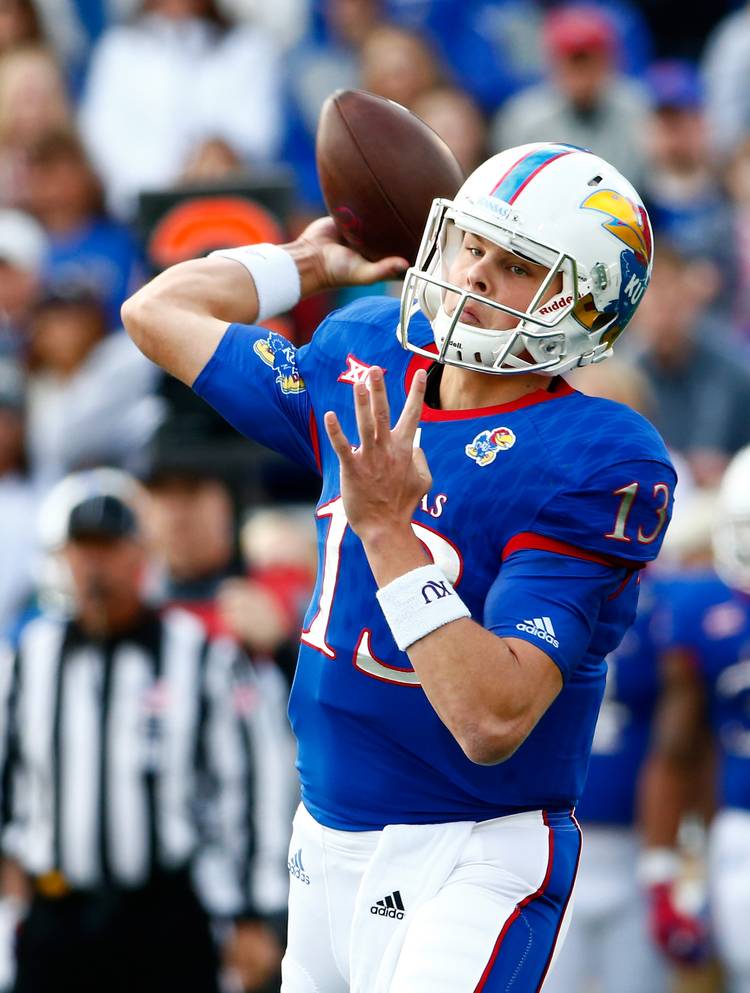 LAWRENCE, KS - OCTOBER 31: Quarterback Ryan Willis #13 of the Kansas Jayhawks passes during the game against the Oklahoma Sooners at Memorial Stadium on October 31, 2015 in Lawrence, Kansas. (Photo by Jamie Squire/Getty Images)

On Saturday against Kansas, the eyes of Texas will be upon …

This will be the true freshman’s fifth consecutive start in place of injured Montell Cozart. With the winless Jayhawks perpetually trailing, Willis has gotten plenty of chances to air it out. He has attempted 30 throws in every game, and in his finest effort, he was 35 of 50 for 330 yards and two touchdowns against Texas Tech. Willis, a three-star prospect, accumulated nearly 6,000 yards with 65 touchdowns in two seasons at Bishop Miege near Kansas City. He looks to be the QB with whom new coach David Beaty hitches his ride in Lawrence.

The senior from Beaumont West Brook leads the Jayhawks with 4.5 sacks and 7.5 tackles for loss. Those numbers would be tops at Texas as well. Goodman is maybe the only bright spot on a defense that ranks last in the Big 12 in scoring (47.1 points) and yards (582.5 yards). Still, he’ll be a challenge for tackles Connor Williams and Kent Perkins, who need to give quarterback Jerrod Heard some room to breathe in the pocket. Goodman was credited with two tackles in last year’s 23-0 Texas win.

The senior set career-high reception totals in three straight games, culminating in a six-catch, 115-yard effort against Oklahoma State. On the season, Parmalee leads the Jayhawks with 29 catches and 464 yards despite missing one game (Baylor). He has appeared to strike a rapport with Willis, catching 14 passes for 222 yards over the past three games. Parmalee has also returned four punts.