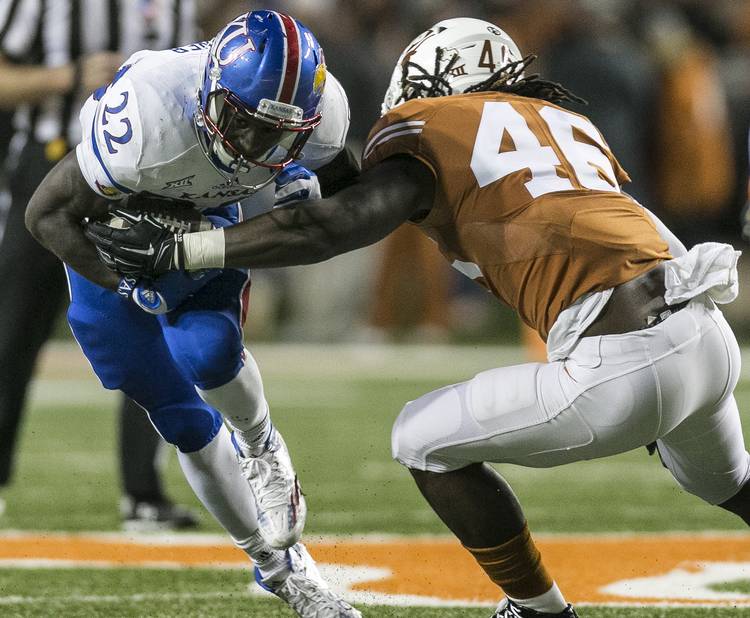 Malik Jefferson was sick to his stomach.

And once Charlie Strong saw the way things were going with his middle linebacker on the sideline, his tummy was tossing and turning as well.

Jefferson did not start Saturday, and if things had gone a little better in the first half, he wouldn’t have played at all in Saturday night’s 59-20 rout of Kansas.

Strong sent Jefferson into the game in the second quarter when it looked like the winless Jayhawks might make a game of it.

“I looked out there and said we can’t continue to miss tackles,” Strong said. “Malik is one of those guys that can make a play.”

It was the second time in as many weeks that Jefferson didn’t start because of a stomach virus. According to linebacker Peter Jinkens, Jefferson had been vomiting in the days leading up to the game, although Strong said Jefferson could have started if necessary.

“He’s really sick,” Jinkens said. “He’s been throwing up all week. Even when he’s not playing, he’s constantly talking to us. He’s helping us out when he sees something. He’s a great teammate.”

New guys: Coaches delivered on their promise to give increased time to some freshmen who hadn’t been playing much. Safety DeSean Elliott made the most of it, recording two interceptions, including one on his shoe tops. Fellow safety P.J. Locke had two tackles and nearly recovered a fumble before rolling out of bounds.

“He’s a great kid, he’s a hell of an athlete, and he practices at a high tempo all of the time,” offensive play-caller Jay Norvell said.

The only freshman who struggled in extended action was cornerback Kris Boyd, who was beaten twice, including on a late touchdown catch.

No one will admit it, but coaches appeared to have this game identified as a good spot to groom some younger guys. Kansas, now 0-9, had not scored more than 20 points in a Big 12 game coming into the night.

Names were removed from the back of jerseys, and helmet stickers recognized the 100-year anniversary of college football in ’69.

Steinmark, a safety who had his leg amputated and later died from cancer, is the focus of the film “My All American,” which will be released Friday. Steinmark’s brother, Sammy, was issued a jersey, a helmet and a T-Ring during a ceremony on the field.

Also, the scoreboard at Royal-Memorial Stadium was rededicated to Steinmark 43 years after the original dedication.

Short yards: Saturday’s game at West Virginia will kick off at 11 a.m. and will be aired on ESPNU. … Running back Chris Warren did not suit up. … Kent Perkins started at left guard in place of Sedrick Flowers, who is battling injuries yet still came on in reserve. Tristan Nickelson started at right tackle.

Texas goes deep early and often in win over Kansas

With three games left, do Longhorns want to play in a bowl game or not?