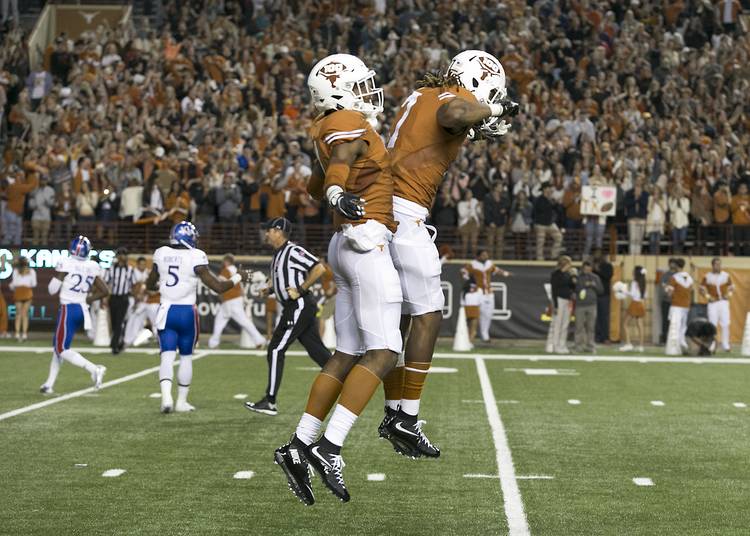 WHY TEXAS (4-5, 3-3) WON: Because this was Kansas. Because this was a special night, with all the hoopla over honoring Longhorns legend Freddie Steinmark. Because the Jayhawks ranked dead last nationally in total defense and second-to-last in pass defense. Because Texas had perfect balance (299 passing yards, 299 rushing yards) and several big plays from Jerrod Heard, Tyrone Swoopes, D’Onta Foreman and John Burt. The sack-happy defense got to KU quarterback Ryan Willis six times.

WHY KANSAS (0-9, 0-6) LOST: Because this was Kansas. The Jayhawks haven’t won a Big 12 game since 2012. The Jayhawks committed four turnovers (three interceptions, one fumble), including a muffed punt at their own 17 and an interception that was returned to the 4. Kansas hung in there for a half (Texas led at halftime, 24-14) but was blown away in the second half. And there were plenty of mistakes, including the fumbled punt return, a missed field goal off the upright, and a failed fourth-and-goal play from the 1.

THE EYES OF TEXAS: … were on three specific Jayhawks — quarterback Ryan Willis, making his fifth collegiate start; defensive end Ben Goodman, who leads Kansas in sacks and tackles for loss; and wide receiver Tre Parmalee, who had set career highs in receptions in his past three games. How’d they do? Willis was 17 of 34 for 214 yards, with a touchdown and two picks. Goodman was mostly quiet, with three tackles. Parmalee did not play.

Defense — DeShon Elliott had two interceptions, including a nifty shoestring grab off a tipped pass in the second half. He also had three tackles.

Cheers …
(1) Dylan Haines made his team-leading fourth interception of the season, returning it 36 yards to the 4-yard line to set up a touchdown.
(2) It was a good night for the Foreman twins — D’Onta averaged 13.1 yards a carry and produced the third-longest run in school history, while Armanti caught his second career TD.
(3) Texas trends continued. The Longhorns improved to 13-2 all-time vs. Kansas and have never lost to the Jayhawks at home. Also, the Longhorns improved to 10-1 under Charlie Strong when they score first and 9-2 when they lead at halftime.

Jeers …
(1) Marcus Johnson dropped not one, but two touchdown catches. On the same drive.
(2) What a quiet night for Johnathan Gray, who was Texas’ fourth-leading rusher with only 22 yards on seven carries.
(3) Texas’ other 10 players — center Taylor Doyle excluded — on one second half play. Here’s how the ref announced it: “False start, offense … everyone but the center.”

Texcetera: Saturday night’s attendance was announced at 92,529. That wasn’t far off the actual crowd. … The Longhorns had eight plays of 20 yards or longer. That included the third-longest pass ever by a UT freshman, the second-longest catch ever by a UT freshman, and the third-longest run. … It had been 48 games since Texas had an 80-yard pass, going back to Dec. 3, 2011 (Case McCoy to Marquise Goodwin). … And it had been 591 games (Chris Gilbert’s 96-yarder vs. TCU on Nov. 18, 1967) since a Longhorn had a run of 90 or more yards. … Swoopes has now scored eight rushing touchdowns this season. … John Burt has two touchdown catches this season. He’s averaged 76.5 yards on them. … Elliott’s two picks make him tied for fifth in UT history for interceptions by a freshman.

On deck: West Virginia (Saturday, time/TV TBA). This one won’t be easy. The Mountaineers beat Texas Tech in Morgantown on Saturday.