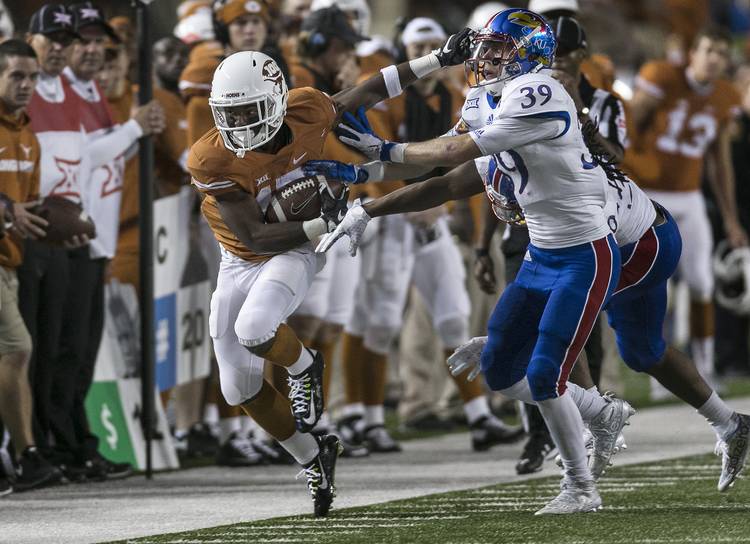 Give Charlie Strong credit for keeping things in proper perspective after Texas whipped up on 0-9 Kansas. The Longhorns won 59-20, but the head coach had a far different feeling — whoop-de-do.

“Well, we’re not going to write we turned the corner,” Strong said afterward. “I want you to keep writing it’s really bad. Do not give them any hope at all. We don’t need that. Every time we get built up, it’s crash and burn.”

As defensive end Bryce Cottrell pointed out, “A win’s is a win at the end of the day.” It most certainly was, as the Longhorns improved to 4-5 with three games remaining.

At this point in the season, the die is cast on what Texas can and cannot do. The coaches cannot make radical system changes. The players are not going to magically improve over the next few days before this week’s road trip to West Virginia (4-4 overall, 1-4 in Big 12).

Saturday’s win continued this season’s theme: when the Longhorns show up ready, they can beat anybody; when they show up flat, it’ll be ugly.

So how about it, Horns? With three games left, does this team want to have a winning season and play in a bowl game or not?

Texas is 0-3 in true road games this season, showing up flat and looking unprepared in all three. This week’s game will be the longest plane ride of the year. That’s a lot of time to think.

“We don’t want to make it a pattern where you lose, then we get mad and go beat three teams,” quarterback Jerrod Heard said. “Unfortunately, we’ve got only (three) games left, so we’ve got to be consistent throughout.”

That’s the rub. This team is consistently inconsistent, swinging wildly from beating 10th-ranked Oklahoma to suffering 24-point shutouts by little ol’ Iowa State. Strong doesn’t know what team will show up on any given week, only that it’s somehow always the seniors’ fault coupled with a “lack of execution.”

Seniors like Tank Jackson, Peter Jinkens and Johnathan Gray have stopped answering questions about Strong’s assertion this team has a lack of senior leadership.

Judging by who’s on the field, it appears the coaching staff is moving on personnel-wise with an eye toward the future anyway.

Sophomore D’Onta Foreman had a game-high 12 carries, five more than Gray. Foreman made the most of his chances, racing 93 yards for the third-longest run in school history and putting up 157 total. Freshman Kirk Johnson, who burned his redshirt against Oklahoma, also got five carries for 18 yards.

The amount of young talent on this team is undeniable. That’s why getting to a bowl game is so critical. Strong and his coaches need the 15 extra practices and 13th game for player development.

To get there, the Horns must win two of their last three games to attain bowl eligibility. Two of those games are in Morgantown and Waco. If Texas is going to get over the hump, it must find a way to win on the road.

“That’s easier said than done,” safety Dylan Haines said, “but we have to find a way to do it.”

For a larger look at the final game stats, click here.

With Kansas in the books, Texas looks to key road stretch