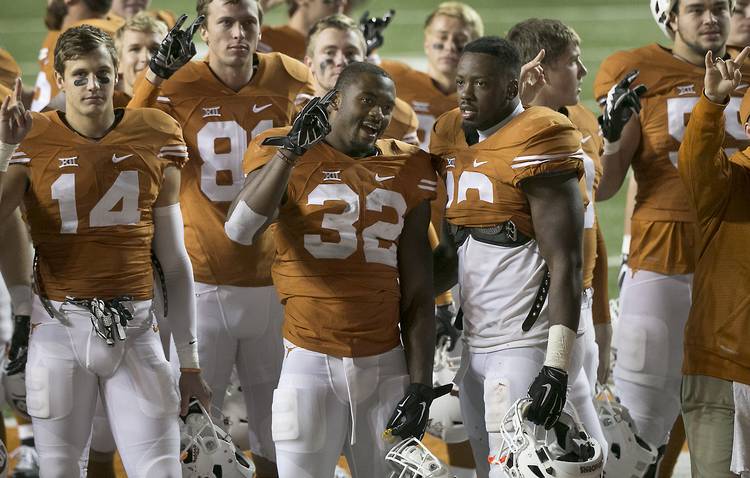 On a typical Sunday, the Longhorns review film from the previous day’s game. This week, Strong put his thumb down on the proverbial fast-forward button, guarding against undue confidence that may have come from a 39-point rout over the winless Jayhawks.

It all falls in line with Strong’s post-game suggestion that the media resist spewing compliments, and instead write critically to keep his team centered heading into a key three-game stretch of West Virginia, Texas Tech and Baylor.

“I (told players) our focus is on West Virginia,” Strong said Monday. “Don’t worry about the last one. Go get the next one.”

The previous routine wasn’t working. In three true road games, the Longhorns have been outscored an astounding 112-10, so the road to Morgantown had to change. Strong sped up the start of the week, scrapping film review for film study, which usually doesn’t come until Tuesday. Mondays are off days.

At 4-5 (3-3 in the Big 12), Texas must win on the road at WVU or Baylor and couple it with a win on Thanksgiving against Texas Tech to get to a bowl game. Anything short of that will result in stalled momentum entering Strong’s third season in 2016.

Strong let down his guard a little and spoke openly about getting to the postseason, not only as a parting gift to senior,s but for the long-term advancement of his program.

“You want to extend your season,” he said. “You want the (extra) practices.”

West Virginia (4-4, 1-4) also needs two wins for a bowl and will be favored in all remaining games. The Mountaineers got battered and bruised throughout a Big 12 gauntlet, losing four in a row to contenders Oklahoma, Oklahoma State, Baylor and TCU, before beating Texas Tech on Saturday.

The Mountaineers are 8.5-point favorites over Texas.

It could have been seen as a ploy to pump up the opponent, but safety Dylan Haines was correct when he said, “I don’t think their record shows it, but they’re a good football team.”

Is Texas a good team? No one seems to have the answer, most of all the coaches who are confounded from week to week. Good showings against Oklahoma and Cal are balanced by clunkers at TCU and Iowa State. After the Kansas game, play-caller Jay Norvell said the offense’s unpredictability is “frustrating.”

“In order to have success, it’s all about being consistent,” center Taylor Doyle said.

The mantra from the preseason — “No Excuses” — stands today. The team is unusually healthy for this point of a season. No player who began the season healthy has been ruled out for the season, though linebacker Ed Freeman has missed the past six games with a shoulder injury. Strong said he expects backs Chris Warren and Alex De La Torre to play after they sat out the Kansas game with minor injuries.

And considering Strong sped up the week, preparation shouldn’t be an issue, either.

“Our players understand how important this game is,” Strong said.

Kansas chatter is over. Heck, Duke Thomas wouldn’t even reveal the game MVPs.

With three games left, do Longhorns want to play in a bowl game or not?