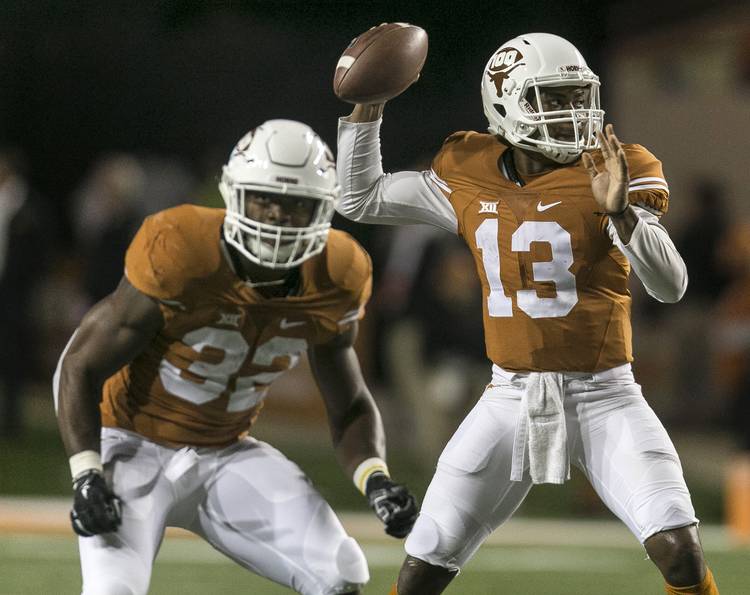 Jerrod Heard is putting the West Virginia game all on his shoulders.

“What the outcome is going to be is how I perform,” Heard said Tuesday. “I definitely have high expectations of myself.”

Heard basically echoed Longhorns coach Charlie Strong, who earlier this week challenged Heard by saying the team’s performance will mirror the performance of the redshirt freshman quarterback on Saturday.

Heard threw for 201 yards in last week’s win over Kansas, snapping a four-game streak in which he fell short of 100 yards each time. On the opening play, he connected with John Burt downfield for an 84-yard touchdown.

Like Strong, play-caller Jay Norvell believes he has Heard pinpointed after eight starts.

“He gains confidence from being physically involved in the game,” Norvell said. “That’s always been his personality. We’ll try to build that as we go and game-plan and start him fast. That’s always important to get the quarterback started, whether it’s getting a completion or getting a run or getting a scramble.”

Heard-Swoopes: Heard has been seeking counsel from an unlikely source after poor games: Tyrone Swoopes.

Swoopes, who was benched when Heard took over after the opener, is glad to lend a helping hand.

“I went through a lot of that last year, and there wasn’t an older guy to talk to and keep me moving forward,” Swoopes said Tuesday. “Just giving him what I would have wanted last year.”

Once David Ash succumbed to concussions, Swoopes, a true sophomore, was the elder statesman in the quarterback room. The only shoulder he could lean on was that of position coach Shawn Watson.

“He’s a young guy, so everyone has some things to learn, but overall I think he’s doing really well with it,” Swoopes said of Heard. “He’s had some good games, and, of course, he’s had some not-so-good games, but that comes with any level of quarterback.”

Heard struggled the past two times Texas played on the road, getting benched in the fourth quarter at TCU and Iowa State.

Ring leader: Heard said recruits don’t ask him about playing at Texas, but if they did, he’d talk about rings.

“I’d just tell them, how many rings do they like?” Heard said. “I’ll tell them straight up, if you like a lot of rings you’ll come here.”

Marketing Texas in China not as easy as it sounds