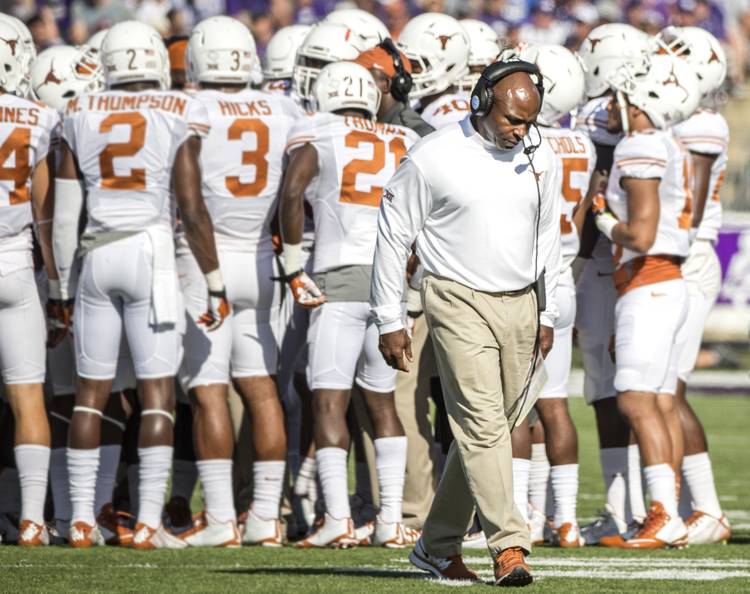 As Texas’ offense ambles toward another reboot this offseason, head coach Charlie Strong is confronted with two appealing options.

Branches of the two systems swing all over the Big 12 and Texas, and Strong will get an up-close view of them both in his team’s final three games.

There is a third option. However, there is no real clamor for making Jay Norvell the permanent coordinator with Texas ranked No. 101 in total offense and No. 94 in scoring heading into West Virginia this Saturday.

Privately, Strong may be combing rankings and researching someone from the Briles or Leach laboratories, which, combined, claim the nation’s top-four offensive attacks, and six of the top 12.

Publicly, Strong won’t say much until the end of the season when it’s appropriate to address the elephant that’s been lingering in the coaching room since Norvell replaced Shawn Watson as the primary play-caller in week two.

On Monday, Strong was asked what message he’d give offensive recruits who may have questions concerning which system Texas will run and what coaches will oversee it. Speculation swirls about the futures of Watson, offensive line coach Joe Wickline, and running backs coach Tommie Robinson, who are in the final year of two-year contracts.

“A lot of times when you talk to recruits, their concern is not so much who the play-caller is, but how I fit, what position I’m gonna play, and what number do I want,” Strong said. … “We’ll be fine. Those guys see it. They understand what’s going on.”

Frankly, who can blame Dickson for re-routing to Baylor? The Bears lead the nation with 665 yards per game and a staggering 8.3 yards per play. Compare that to Texas, which has scored 10 points in three road games.

A notion that would’ve seemed ridiculous in the past now seems practical — Texas may want to copy Baylor’s blueprint.

Briles‘ offense is working wonders for Dino Babers at Bowling Green (No. 3-ranked offense, 593 ypg) and for Philip Montgomery at Tulsa (No. 12, 520 ypg). Their coordinators, Bowling Green’s Sean Lewis and Mike Lynch, and Tulsa’s Sterlin Gilbert and Matt Mattox, hold the title in name only and do not call plays. The same is true of Briles’ son, Kendal, who defers to his father.

Gilbert, a former Texas high school coach, would make for an interesting selection. In 2008, he was named West Texas coach of the year after leading San Angelo Lake View to its first playoff win in 12 years. He left to be offensive coordinator at Temple High before joining Babers at Eastern Illinois, where Gilbert mentored quarterback Jimmy Garoppolo, who threw for 5,000-plus yards in 2013 and was drafted in the second round by the New England Patriots.

Then there’s the Air Raid, the brainchild of Leach and others, which Texas will end up facing five times this season. It has produced immediate dividends at Oklahoma, where Lincoln Riley, a pupil of Leach’s at Texas Tech, has turned Baker Mayfield into a Heisman Trophy longshot in the nation’s No. 6 offense.

At TCU, defensive-minded head coach Gary Patterson tabbed Doug Meacham and Sonny Cumbie to install the Air Raid after the 2013 season. Since then, the Horned Frogs have lost only two games.

With Meacham serving as the play-caller, Cumbie, a former Texas Tech quarterback, could be lured to Texas as the singular voice on offense. His downsides are his age — he’s 34 — and his relative lack of experience, having coached as a full-time assistant for just five seasons. And Eric Morris, the figurehead coordinator for Kliff Kingsbury at Texas Tech, is even younger than Cumbie at 30.

Perhaps Strong is pleased with what he’s seen and keeps Norvell, who has had some successes, such as igniting a rushing attack that has averaged 225 yards in his eight games. Compare that to Watson’s last eight games, when Texas ran for 142 yards.

For his part, Norvell has said he’d like the job full-time, but he also accepted blame for an ugly 24-0 loss at Iowa State two weeks ago. This week, Strong may have tipped his hand, saying “when you don’t move the ball, you don’t score points, and that’s always a concern.”

Frankly, Strong’s offensive decision-making is questionable at best. He retained Bruce Chambers and hired Les Koenning to his first staff, only to fire them both after one season. He then entrusted Watson, who is rooted in pro-style, to install the spread. The transition went so poorly that Watson was demoted after one game, a 38-3 loss at Notre Dame.

A do-over is expected. Strong has choices.

Notebook: Heard says team will play as he does