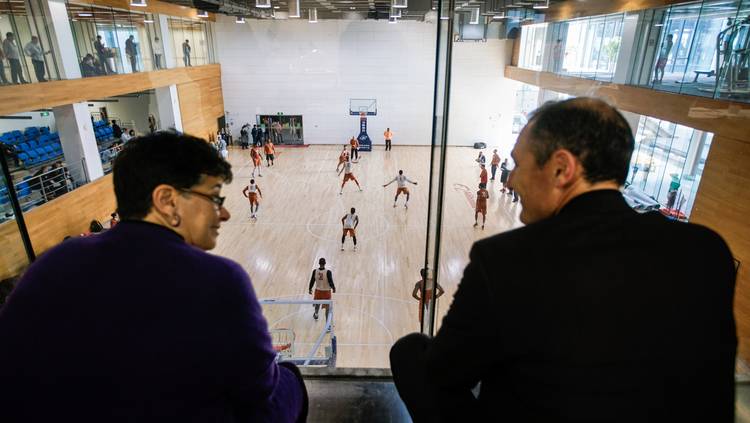 SHANGHAI — This has to be a first: Texas signed two men’s basketball recruits on Thursday morning while the coach, players and staff were in another hemisphere.

Guard Jacob Young and center James Banks both sent their paperwork to Austin. But coach Shaka Smart and his assistants tried to keep calm in a Chinese hotel, waiting for any positive news from the UT compliance office back home, where it was still Wednesday afternoon.

“They’re both our kind of guys, which is really important,” Smart said. “Culturally they fit really, really well. They both love to work and love to play. You’re not going to have to beg them to get in the gym.”

Young, a 6-foot, 1-inch shooting guard from Houston Yates, was ranked the 85th-best player in the nation, according to Scout. He was a Class 5A all-state pick while leading Yates to an 18-9 record last season.

Jacob’s older brother, Joe Young, was the Pac-12 Player of the Year last season at Oregon. Stories have already popped up in Indianapolis media about Joe Young’s work ethic with the Pacers. Smart said he can see similarities in Jacob.

“Jacob Young’s work ethic is has good as anyone at that age I’ve seen,” Smart said. “He needs it, really, really needs it.”

Banks is an intriguing story. He’s played organized team basketball for only three years. Still, he averaged 23 points and 14 rebounds as a junior last season at La Lumiere School in Indiana.

Smart said when the UT coaches started recruiting Banks, his mother showed them a video of Banks’ first layup attempts. Now, Banks is considered the nation’s 45th-best player, according to Scout.

“He literally looked like a newborn colt,” Smart said. “He couldn’t get his steps down to shoot a layup, so he’s come a long, long way. His potential is really, really high.”

The Longhorns, who could sign four more players, are purposely holding scholarship slots open for the spring signing period. However, top-flight recruits are somewhat skeptical about signing on before Texas begins the season with a new coach, which is understandable.

Texas opens the season against Washington at Mercedes-Benz Arena in Shanghai. Tipoff time in the United States is 9 p.m. Central time on Friday.

“One thing we’ve heard a lot is they want to see how we play, how we coach our guys,” Smart said. “They want to see what type of experience our players have on and off the court.”

Holmes, ranked as the No. 2 recruit in the country by ESPN Hoopgurlz, was on the 2014 FIBA U17 World Championship Tournament Team while playing for Team USA.

“Joyner has a unique skill set with her size, speed and power,” Aston said. “The comments that have come across are that she is the women’s game’s closest comparison to Lebron James in regards to her size, strength and athletic ability.”

Sutton helped Parkway North High in St. Louis to a 25-6 record last season. An all-around player, she averaged 16 points, 5.5 rebounds and 2.3 steals. She converted 78 percent of her free throws.

Underwood might have been in ESPN’s top 100 if she hadn’t suffered a season-ending knee injury during her junior season. At the time of her injury last December, she was averaging 24.3 points, 13.2 rebounds and 6.4 assists.

Caron-Goudreau averaged 4.6 points and 4.1 rebounds in just under 20 minutes a game last year at Vanderbilt. She transferred to Gulf Coast State College and will start at power forward this season.

Switch-hitting infield Ryan Reynolds, of Monroe, La., is the only non Texan among the 12 signees. Reynolds is the son of Shane Reynolds, a former Longhorns pitcher who played in the Major Leagues from 1992 to 2004.

On the women’s side, Texas landed Desoto’s Alexis Duncan, who ranks No. 1 in the world at 12.95 seconds in the 100 hurdles. She finished seventh at the youth world championships. Texas also acquired Kingwood’s Abby Guidry, who finished seventh in the state in 3200 meters.