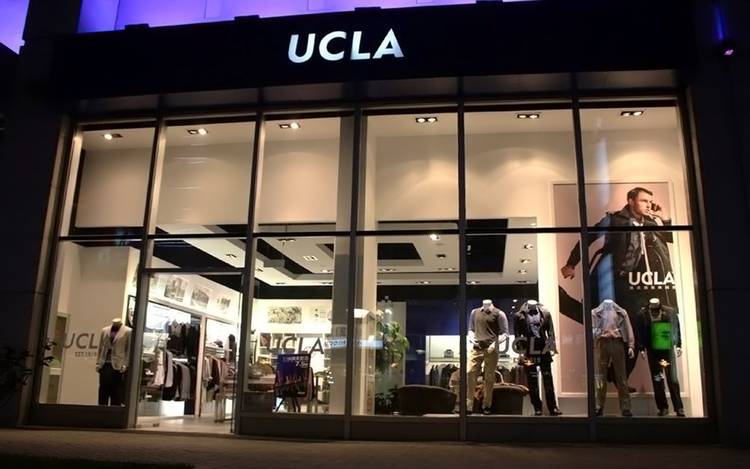 UCLA stores in China are more like Macy's or Dillard's stores. Customers are not overwhelmed with Bruins jerseys and hats. It's more about casual wear as the school markets toward an active, healthy lifestyle. (Photo via The Daily Bruin)

HANGZHOU, China — If Texas and Washington officials are both being honest, this basketball game in China isn’t about exposing student-athletes to new cultures. It’s about selling T-shirts.

Steve Patterson also desperately wanted to expand Texas’ brand into new territories, so why not start with one of the largest countries on Earth? The former UT athletic director traveled to China on trips with Arizona State and always raved about the “staggering” amount of UCLA retail stores here — possibly 70, 80 or even 100.

“This number of 100 (stores) is inflated,” said Cynthia Holmes, who oversees UCLA’s international licensing and branding. “It’s a lot inflated at the moment.”

Turns out that even popular brands must fight economic realities. UCLA’s total number of stores is down sharply from recent years. “Thirty-plus is a good number to use,” Holmes said.

Any UT fan hoping to visit a UCLA store in Shanghai will be disappointed. It closed. So did the store in Hangzhou.

UCLA currently has about 20 store fronts scattered throughout the country, Holmes said. The others are essentially store-within-a-store concepts where UCLA has dedicated floor space.

If UT officials want to open a Longhorns store here in the Far East and make thousands, as Patterson dreamed, well, it’s just not that easy.

“It’s been a great educational process for me in understanding how all this gets put together,”  said Craig Westemeier, who oversees licensing and branding for UT athletics. Westemeier is part of UT’s travel party.

UCLA first began international exploration by going into Japan in the late 1970s. The school balanced two goals: market the Bruins athletic teams and a Southern California lifestyle. The latter is what really helped the brand take off internationally, Holmes said.

“It’s not being sold necessarily as, ‘Hey, I’m a fan of the Bruins,’” Holmes said. “It is being sold as a retail brand, and every retail brand that’s out there — particularly when you talk about fashion — there’s a target audience that has an affinity for something.”

Along the way, UCLA had to fight off counterfeiters and pay untold sums to protect its trademark. The school defeated one counterfeiter who sold merchandise for the “UCLA English Institute.” Dozens more have come and gone, all trying to capitalize off the Bruins’ brand.

In most Asian countries, trademarks can be obtained and never used, Holmes said, unlike in the United States where you must show proof of use. That’s why Texas A&M officials went after the Seattle Seahawks when the NFL franchise first used the “12th Man” logo. The two sides reached an agreement in 2006, and now the Seahawks call their fans the “12s.”

In China, squatters can sit on trademarks, and there’s not much anyone can do to stop them. Texas began building its international license program in the early 1980s just to be protected, Westemeier said.

Countries have all sorts of filing fees. To get it done right takes lawyers, who also charge fees. At some point, maintaining an international licensing portfolio takes serious money.

By comparison, Texas grosses $50,000 to $60,000 on international licensing. That’s nothing compared to UT’s domestic sales. The Longhorns grossed just under $9 million in licensing and merchandise sales during the 2014-15 year, Westemeier said.

“We certainly believe the Texas marks and name has a lot of interest, and there’s a lot of pride,” Westemeier said. “We’ve got alumni all over the world, so we do think there are some more opportunities.”

The process to building an international audience takes baby steps. UCLA’s been doing this for more than three decades. Texas, a wildly popular brand back home, is still learning the ground rules.

The question is whether university officials ultimately believe this is something worth pursing.

“We do agree we’re a global university,” Westemeier said. “What’s really a springboard to get people to recognize you? They may hear about you because they traveled to the U.S. That’s where the opportunity lies from having a game in China.”

Notebook: Heard says team will play as he does