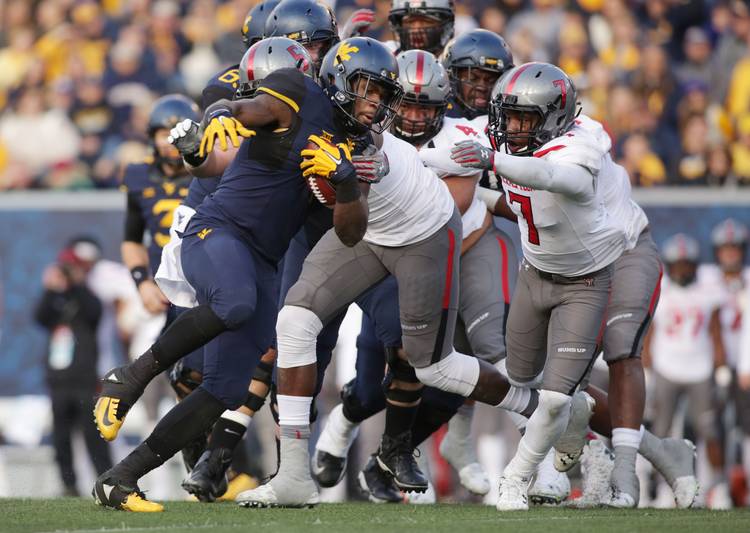 If not geographically pleasing, West Virginia always felt like a natural fit for the Big 12 because its wide-open offense meshed with the rest of the league.

Yet in year four since conference realignment, the Mountaineers have undergone somewhat of an identity change, shifting to a ground-attack behind backs Wendell Smallwood (954 yards, six TDs) and Rushel Shell (437 yards, five TDs).

At 220 yards per game, WVU ranks third in the conference and is averaging 38 more yards than last year, and 49 yards more than in its first Big 12 season in 2012.

“After Oklahoma, they’re probably running the ball better than anyone else,” Texas defensive coordinator Vance Bedford said on Wednesday. “I haven’t seen Baylor play, of course, but (WVU is) sticking to the run. When you get in the red zone, you might as well buckle up all of your chinstraps because they’re gonna bring it to you.”

An extreme was reached last week when the Mountaineers completed just 12 passes on 24 attempts versus 57 runs in the win over Texas Tech. Smallwood and Shell combined for 274 yards and three touchdowns, and quarterback Skyler Howard added another score on the ground. Tech’s rush defense, which ranks No. 126, certainly played a part in WVU’s game plan.

WVU coach Dana Holgorsen had to remake his offense after last season when he lost quarterback Clint Trickett and receiver Kevin White, who was taken No. 7 overall in the NFL draft by the Chicago Bears. In last year’s loss to Texas, WVU ran on 41 snaps and passed on 49. White caught 16 passes for 132 touchdowns but was kept out of the end zone.

“(Holgorsen’s) doing some things he probably hasn’t done in the past, but he likes his two running backs and he has a big physical line,” Bedford said.

No shake-up at safety: Despite picking off two passes against Kansas, freshman safety DeShon Elliott will not be elevated to starter on Saturday.

However, Bedford said he is targeting 30 snaps for both Elliott and freshman safety P.J. Locke. They are not likely to play together, though, and instead will line up alongside veteran starters Dylan Haines and Jason Hall.

Elliott missed almost all of fall camp with an injury and did not make his debut until game six against Oklahoma.

Injuries: Bedford said linebacker Ed Freeman will miss his seventh game in a row with a shoulder injury, but that he could be back against Texas Tech on Thanksgiving.

“Playing linebacker, shoulder injury, you have to hit every time,” Bedford said. “You don’t rush a guy back.”

Bedford said LB Malik Jefferson, who has missed two starts with a stomach virus, has practiced every day this week and is “feeling good.”

Swoopes, who was benched for Heard after the opener, has been glad to lend a helping hand.

“I went through a lot of that last year, and there wasn’t an older guy to talk to and keep me moving forward,” Swoopes said Tuesday. “Just giving him what I would have wanted last year.”

Once David Ash succumbed to concussions, Swoopes, a true sophomore, was the elder statesman in the quarterback room. The only shoulder he could lean on was that of position coach Shawn Watson.

“He’s a young guy, so everyone has some things to learn, but overall I think he’s doing really well with it,” Swoopes said of Heard. “He’s had some good games, and, of course, he’s had some not-so-good games, but that comes with any level of quarterback.”

Jacob Young, James Banks both sign up to join Longhorns