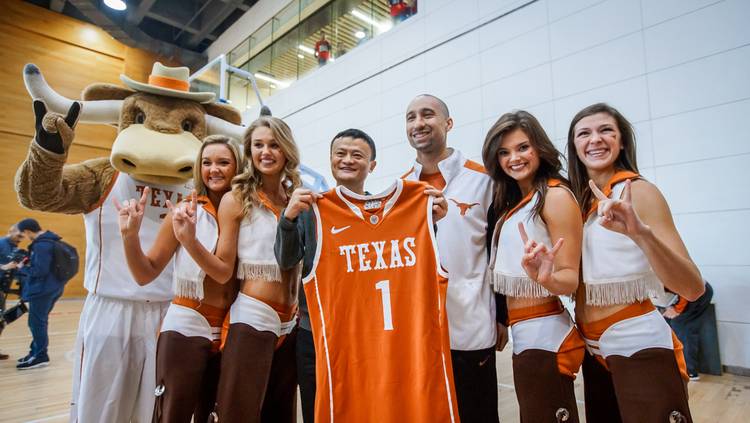 Texas coach Shaka Smart poses with Jack Ma, chairman of the Alibaba Group, on the team's visit to the Internet conglomerate's headquarters on Tuesday. (Photo by Chad Ingraham, Pac-12 Conference)

SHANGHAI — November 11 is Singles Day in China, the biggest online retail shopping day of the year. It started as the anti-Valentine’s Day and grew into a circus, much like Black Friday in the United States the day after Thanksgiving.

While celebratory fireworks crackled outside the Hyatt on the Bund, the Texas men’s basketball team met in a second-floor conference room and quietly continued preparations for Saturday morning’s game against Washington. Tipoff is at 9 p.m. Friday back home.

“It’s gonna sound boring, but my favorite thing has been the three practices we’ve had over here,” UT coach Shaka Smart said. “Our guys have been terrific with their attitude and enthusiasm. If we can play on Saturday with the same approach these guys have brought to practice, then I’m really excited to see.”

Basketball legend and noted Grateful Dead enthusiast Bill Walton — “That’s 2 Ls,” he said — attended practice on Tuesday. He was taken aback by the sheer volume of UT’s workouts. “Are these practices always this noisy?,” he asked team officials. Nowadays, yes.

Smart badly wants to stay with the normal routine, but it’s impossible. After Tuesday’s practice, the team toured Alibaba headquarters and met chairman Jack Ma, the same man who 24 hours later stood on a Beijing stage with actor Daniel Craig and crowed about more than $9 billion in sales by lunchtime.

When the Longhorns hit the practice court on Wednesday, it was all basketball business. The team practiced in a gym adjacent to Huanglong Stadium in Hangzhou. The stadium, also known as Yellow Dragon Stadium, is a soccer venue that holds about 51,000 people. “It’s not Cooley,” Smart said of the workout facility.

After Wednesday’s practice in Hangzhou, the team boarded a bus and took a three-hour ride back to Shanghai, capping a full day.

“Certainly we’re in China, and we’re around some neat opportunities. We want our guys to take advantage of those and learn about a really unique place,” Smart said. “But at the same time, we’re at a critical time of the season where we want to continue to grow and develop.”

Grading the freshmen: All three of UT’s freshmen made a strong impact in last Friday’s preseason scrimmage against Division II Tarleton State. Were post-game film session grades just as good?

“On offense,” Smart said. “They were among our better players on the offensive end. Defensively, they’ve got a long way to go.”

Kerwin Roach, Tevin Mack and Eric Davis all had standout individual moments during the exhibition. However, Washington has multiple standout freshmen, too. The Huskies had the nation’s sixth-best recruiting class, according to Scout.

“I told our guys, ‘Their team is a lot like having six or seven Tevin, Kerwin and Erics,’” Smart said. “They’re really good, really talented and they’re dangerous.”

Lammert, Cleare back: Smart said forwards Connor Lammert and Shaq Cleare both practiced in China and are medically cleared to play against the Huskies. Lammert missed last Friday’s exhibition due to illness. Cleare had a root canal.

Had there been any problems with Cleare’s teeth, Smart said, “We had a guy in Shanghai ready if we needed it.”

Signing day: Wednesday was Singles Day here, but it was national signing day back home. The Horns landed two players during the fall signing period while keeping several spots open for the spring.

Texas coaches cannot make any comments until the players send in their letter of intent. The major time difference left Smart and his assistants cooling their jets. Shanghai is 14 hours ahead of Austin.

Briefly: The Horns are scheduled to leave the team hotel at 10 a.m. Thursday (8 p.m. Wednesday night back home) and practice at a local high school. Afterward, the team will interact with local students, many of whom rarely see 6-foot, 10-inch basketball players up close. Texas and Washington players will then take a river cruise Thursday night on the Bund.

Marketing Texas in China not as easy as it sounds

Jacob Young, James Banks both sign up to join Longhorns