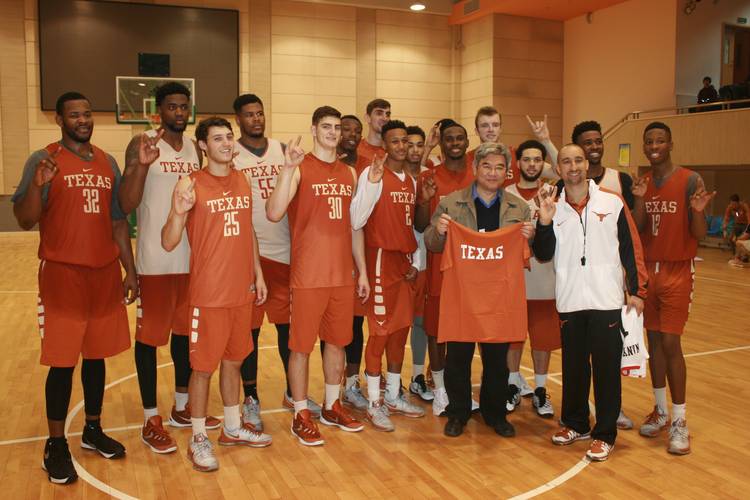 The Texas men's basketball team posed for photos with a local high school principal after Thursday's practice. But the Longhorns are ready to move on and face Washington.

SHANGHAI — The first journey to China has been a humbling experience for the Texas men’s basketball team. Deciphering the food, culture and language barriers will be something these 18- to 22-year olds will never forget.

This week in China has felt like a football bowl trip. There are a bunch of things to see and do and, oh, by the way, there’s a game at the end. And it’s a big one, coach Shaka Smart’s first at Texas and the season opener at Mercedes-Benz Arena.

Tipoff is 11 a.m. Saturday local time, but it will start at 9 p.m. Friday for those watching on ESPN back in Austin. From a historical perspective, it’s the first regular-season intercollegiate game between two U.S.-based teams on Chinese soil.

Football coaches preach the importance of winning the bowl game, because it permanently alters how players view the entire experience.

The winners walk away telling everyone they had a great time. The losers? Well, the food really wasn’t that good, the hotels weren’t that nice and it was lousy. A trip to China is different, but because it’s the season opener, players will see a W or L on the schedule all season long.

“I actually want to go after these guys and not be hesitant,” guard Demarcus Holland said. “That’s a long flight to have regrets. Sixteen hours on a plane to have regrets about the game you just played is pretty horrible.”

These Longhorns actually know what it feels like to fall flat and suffer an ignominious ride home. Last March, Texas got bounced by Butler in its NCAA Tournament opener. Organizers made the Horns pack up and hustle back to the Pittsburgh airport and the Longhorns were in the air, flying into the offseason, before the NCAAs really got going.

That loss triggered former coach Rick Barnes’ dismissal. Then-athletic director Steve Patterson pried Smart away from Virginia Commonwealth when several other brand-name schools couldn’t. A new wave of positive energy surged through the players in the months that followed.

Smart turned everything into a competition, and the players responded with more energy in practice. Students at a local Chinese high school were taken aback by how much whooping and hollering was going on. So was Bill Walton.

Considering these are the same players that struggled to win Big 12 road games and melted down in the postseason, it’s best to save the hype for when they’ve actually accomplished something. But at the moment, there’s a clear sense of renewed purpose after a disappointing 20-14 season.

“We came down here to win,” guard Isaiah Taylor said. “Seeing everything is great,  but if we don’t get the win, we didn’t do what we came here to do. And that’s beat Washington.”

On paper, Texas should have a clear edge over Lorenzo Romar’s Washington Huskies. The Longhorns have vastly more experience, while the Huskies have an entirely rebuilt roster.

“Even teams with a lot of returning guys, no team is exactly the same as it was the year before,” Smart said. “But a team like Washington is almost across-the-board different in terms of their personnel.”

Guard Andrew Andrews is Washington’s only player with meaningful experience. The Horns will counter with veterans like Holland, Taylor, Kendal Yancy and Javan Felix, all of whom have plenty of battle scars. Talented freshmen Kerwin Roach, Eric Davis and Tevin Mack all turned heads during the preseason, too.

Texas’ two big men — Cam Ridley and Prince Ibeh — helped the Horns become one of the nation’s best in rebounds and blocks last season. Adding 6-8 transfer Shaq Cleare to the mix should only help.

“We’ve been trying to be patient with our group,” Romar said. “We don’t want to be a jack-of-all-trades and a master of none. But the guys have been willing.”

The Longhorns are willing to send the Huskies packing and get the Smart era started right.

“They came over here to get a butt-whooping; that’s how we’re viewing it,” Lammert said. “Our mindset has to be they got on a plane and came all this way just to get a loss.”