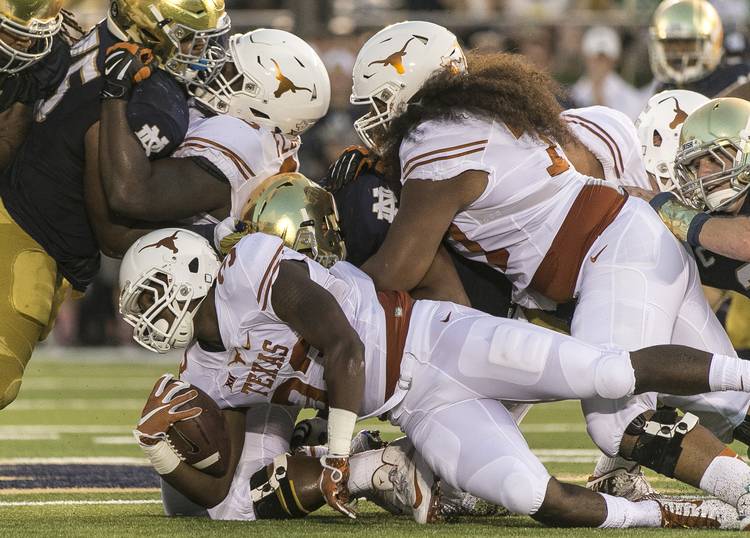 Patrick Vahe is going to scream and shout, stomp and swing, and just when it seems like Texas’ freshman offensive lineman is cooling down, he’ll pull out his tongue and stare menacingly.

And that’s before the 320-pound guard even leaves the locker room.

“I do it whenever something very big is coming up,” Vahe said.

This qualifies as such. Sitting at four wins with three games to go, Texas (4-5, 3-3 in the Big 12) needs to get moving to avoid committing a cardinal sin of the program by falling short a bowl game. An upset over the 8.5-point favorite Mountaineers may be essential to postseason vitality, especially with unbeaten Baylor lingering at the end of the season.

So Vahe isn’t taking chances. He will wear an intimidating scowl and do the motions of the New Zealand war cry,  just as he did as a player at Class 6A power Euless Trinity, and just as he did with TV cameras watching after Texas upset Oklahoma on Oct. 10.

More on the haka later. First, more on Vahe.

This week, he spoke with the media for the first time since arriving in January and revealed that he had eagles flapping in his stomach before the opener at Notre Dame — “Not butterflies. Eagles.” Against Oklahoma, Vahe said his play was inspired by a Sooners player tugging his hair, a long, black, curly mane that resembles that of former NFL safety Troy Polamalu.

Bad move. Vahe played his best game of the season against OU.

For such a tough guy, Vahe is particular about his hair. He washes it twice a day, brushes it three times a day, and “if I’m lazy, I put it in a bun.” His last haircut was four years ago when he was a high school freshman.

“When people pull on my hair, like that OU game, I get very angry,” he said.

“If you get on the opposite side of him, I feel sorry for you,” Longhorns quarterback Jerrod Heard said.

Play-caller Jay Norvell said Vahe and fellow freshman lineman Connor Williams, who plays left tackle, could become team captains later in their careers “because of the personality they have.”

On Saturday, there’s no telling how Texas’ line will be configured for the 11 a.m. kickoff. In the first eight games, the only changes came when right tackle Kent Perkins missed starts against TCU and Oklahoma with a knee injury. Last week featured the first unexpected shakeup, with Tristan Nickelson getting the start at right tackle and Perkins sliding inside to replace left guard Sedrick Flowers, who has been bothered by injuries.

By the end of the 59-20 rout, reserves Elijah Rodriguez, Jake Raulerson, Terrell Cuney and Flowers had logged considerable snaps and had been part of an offensive attack that produced 598 yards. Norvell said the reports he’s received from line coach Joe Wickline indicated Raulerson has made strides in practice, which is fueling speculation that he may be closing in on Flowers or center Taylor Doyle.

Vahe, who has started every game at right guard, was at least one time viewed by the staff as a center. With Doyle in his final year of eligibility, Vahe could move over and man the spot for the next three seasons.

Vahe, the No. 19-ranked player on the American-Statesman’s Fabulous 55 last year, calls himself a work in progress. He was admittedly lousy against Notre Dame, but more often than not he has graded out in the B range, forever jealous of the As that Williams typically garners. Keep in mind that in a perfect world, Vahe and Williams would redshirt and then, maybe, compete for a spot in year two. Texas’ lack of depth, and, frankly, talent, didn’t allow for a patient approach.

Vahe says he strives to show up to meetings five minutes early, and is is a serious note taker during film study, never wanting to repeat a mistake.

“I’m the type of guy that wants to get coached, wants to learn everything I can,” Vahe said.

Soon, he’ll be a teacher. The haka has his teammates curious; they want to learn it.

“I’m waiting to learn,” Doyle said. “I should have picked it up by now.”